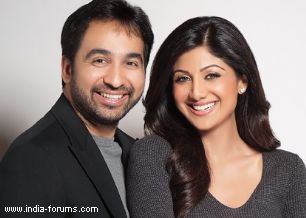 Bollywood actress Shilpa Shetty and her businessman husband Raj Kundra completed four years of marital bliss Friday. The couple looks back at their togetherness with a smile.

"Happy Anniversary Raj Kundra. Four years today. The good thing is...don't even know how they've gone by. You are my soulmate. Thank you for being YOU," Shilpa posted on her Twitter page.

Raj, a London-based businessman, thanked their friends and fans for the anniversary wishes, and tweeted: "Blessed with a gorgeous wife and it's been four blissful years. Amazing how time flies so fast."

Shilpa, who started her career as a model at the age of 16, ventured into acting in 1993 with "Baazigar" and was appreciated for her performances in films like "Dhadkan", "Rishtey" and "Phir Milenge".

She later garnered attention all over the world by winning Britain-based celebrity reality TV show "Big Brother" in 2007.

Urmila Matondkar Does Not Regret, But Ready to Apologise for ...
an hour ago

No Bail for Rhea Chakraborty and Showik Chakraborty? Bombay ...
2 hours ago