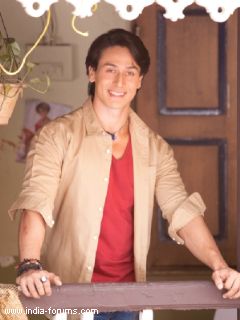 Tiger Shroff respects his teachers and never turns down any requests coming from them.

When Tiger's debut film Heropanti released, his gym trainer had held a personal special screening of the film for two consecutive days in Vasai. Tiger's trainer wished for his student to be present at the screening and as a dutiful student, Tiger attended the screening on both the days.

Tiger is a dedicated and disciplined guy who trains hard. He feels that his teachers play a very important part in where he has reached today and so is always ready to give back to them in any way possible.

Riding high on the success of his debut film Heropanti, Tiger recently shot a video as his tribute to his idol Michael Jackson. Tiger is going to be seen dancing in this video with his dance teacher, to the songs of Heropanti as well as MJ's iconic songs.

When Tiger was approached to comment on the story, he was embarrassed and said, "They are my teachers and if there is anything they need me to do, I will make myself available as much as I can."
2 Likes