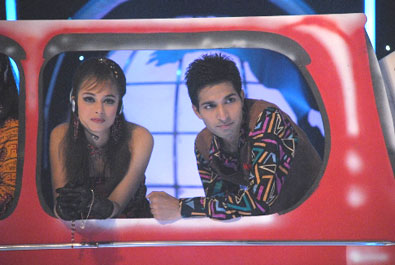 Friday is the day of elimination and starting from the contestants to the viewers all know about it. This Friday the theme at SaReGaMaPa will be sad songs. The show gets started with a grand performance by Aditya on the song "Ek din teri bahoon mein, bahoon mein neegahoon mein." Raja is again set to give a brilliant performance. He will be singing Teri Deewani. Be ready for some comparision with Hemchandra’s singing with Aneek’s as Aneek will be singing the title song from Saathiya. One of the show stealer on Friday would be Junaid. He is singing the song Pal by KK. Even Poonam, Musarrat and Amanat Ali are going to give brilliant performances. So are we all set to enjoy an episode full of really great performances?

It was a bad day as far as results are concerned. The three favourites of the mentors – Amanat Ali, Abhijit Kosambi and Harpreet Deol all three fall under Trishanku. Raja after being at the top consistently in the last three rounds is at number three this time. At the top this week is none other than Mauli Dave followed by Aneek Dhar. But there is good news for Junaid as Bappida announces to give break to Junaid in his forthcoming movie “Love.Com”. And to know who gets eliminated and what is the reaction of the participants to this shocker – Do not miss out this exciting episode on Friday at 10 PM only on Zee TV. 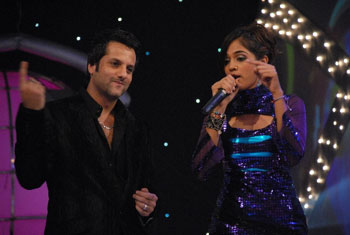 On Saturday the viewers for the first time on a TV show will witness the music release of Ram Gopal Varma’s film “Darling”. This is the film where Himesh Reshammiya, the mentor of Rock Gharana has sung a song and also composed the music along with Pritham and this is the last time that Himesh will be singing or giving music for a film in which he is not acting. Fardeen Khan and Tulsi Kumar will be the guests for this episode to promote this movie and along with them, Bhushan Kumar, his wife Divya, will be present on stage for the music release. The makers of the movie had decided to take this show as the medium for release as it is undeniably one of the best and most popular shows on Television. Aditya Narayan, the host of the show is very much excited with the event and adds that this will also give some extra publicity to the show. Fardeen Khan, the only actor present from the cast of this film, has lot of fun in the show and also comes twice on stage to dance to the tunes of certain performances. He not only enjoys but also gives his honest remarks on the performances which encouraged the participants and make them feel at ease.

The show on Saturday would also see a drama happening that will surely remind the viewers of Challenge 2005. Himesh is going to tell everyone about a love story this week. This time it’s Aneek whose lady love will be revealed by the maestro. Unlike last time, when it was just Vinit, this time the story has a twist. According to Himesh, there’s a third contestant too in this love story making it a “triangular love story”.

Now who is this girl? And who is the third contestant in this love story? For this, you all need to watch the episode on Saturday at 10pm IST, Zee TV. Don’t miss it!!

cool_aqua 14 years ago go to a junk guys party, seduce him, and get a kiss planted ...and shout to the world..'mummy...he kissed me..'!! ofcourse she needs respect....ignore her guys...thts wat she deserves

+ 5
14 years ago i hope she does well...i like her open minded nature..she speaks her mind which is something rare u'll find in todays world...
hpe she wins nach baliye

Thanks for an interesting interview! :D

Who is this 3rd contestent..... thats all I want to know.