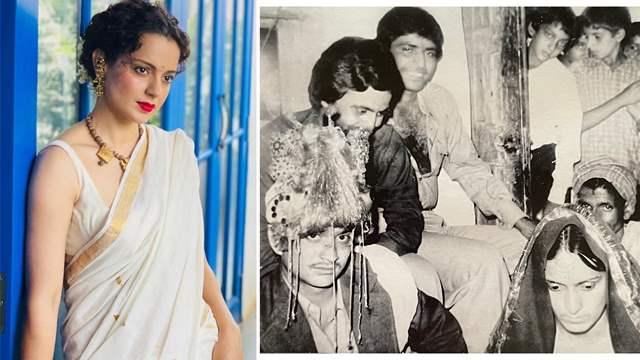 Bollywood actress Kangana Ranaut has shared a quirky story about her parent’s relationship and how they got married to each other.

On Monday, on the occasion of her parent’s wedding anniversary, Kangana recalled how her father had sent a proposal to her grandfather who had rejected him for not having a good reputation but her mother finally convinced him.

Sharing a vintage picture from her parent’s wedding function, Kangana wrote on Twitter: “Today is the wedding anniversary of my parents, growing up they lied to us that it was a conventional arranged marriage it’s only much later nani told us they had a raging affair, papa saw mom at a bus stand returning from college,took that bus every day till she noticed him 1/2”

She added: “When papa sent proposal Nana ji brutally rejected cos papa didn’t have good reputation, Nana had selected a groom with government job for mom, she was his favourite and lovingly called her Guddi, but mom fought all odds and convinced Nana,thanks for that, happy anniversary ?? 2/2”

Earlier this month, Kangana had taken to Twitter to share that her parents have taken the second dose of COVID Vaccine in Himachal Pradesh.

Meanwhile on the work front, Kangana’s upcoming film Thalaivi was recently postponed owing to the rising cases of Covido in the nation. The film is based on late CM Of Tamil Nadu, J Jayalalithaa, and also stars Arvind Swami, Madhoo, Bhagyashree among others. Directed by AL Vijay, Thalaivi is slated to release in Hindi, Tamil, and Telugu.