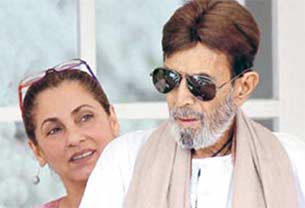 Dimple Kapadia remembers her late husband Rajesh Khanna, best known as the first superstar of the Hindi film industry, as a great star and says there's no one like him.

Rajesh Khanna, also known as Kaka, starred in hit films like "Aradhana" and "Kati Patang". He died in 2012, aged 69, after battling health issues.

Recalling the last days of Rajesh Khanna, Dimple said: "I want to say something - he (Rajesh Khanna) was not feeling too well and he had to come to the balcony and wave to the press.

"So I gave him a shawl and my sunglasses and I said, 'Kakaji aap na thoda profile dijiyega, straight mat dijiyega, profile looks better'.

"He looked at me and said, 'Aacha ab tum mujhe sikhaogi (Now you will teach me). And I was like - no, no sorry, sorry!"

"What a star, what a star he was! There is no one like him," added the actress who is gearing up for the release of her new movie "What The Fish!", coming out Dec 13.

She may have worked in over 60 films, but the 56-year-old actress says even now every shot is like a matter of life and death for her.

"I never enjoy working. I am too honest, so I have problems with myself all the time. So I am always cribbing and nervous. Sometimes I am fully prepared and suddenly I get blank - I forget my lines. Every shot is a matter of life and death for me, so I don't enjoy that process," said the "Bobby" actress.

Interestingly, Dimple is central to the plot of "What The Fish", a fun filled mystery drama.

Aishwarya Khare and Anjani Kumar Khanna roped in for Naagin 5

Huma Qureshi Loses Cool; Says She has been 'Unnecessarily ...
37 minutes ago

2020 is Turing Out to be a Fruitful Year for Prabhas!
37 minutes ago