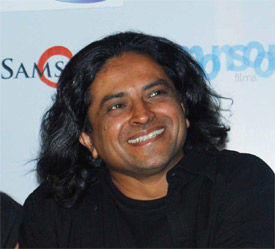 Pan Nalin, the Director with a magic touch, the creator of the internationally acclaimed film, 'Samsara' talks about his experience in making the film and much more..


Q.: Why did you choose to make an art film?
A.: Cinema in general, deals with both artistic and commercial aspects, so I do not want to split art and commercial films. If films are categorized in this manner, then I believe that it is an injustice meted out to the art directors. That is one reason why I never go on stage to take an award.

Q.: Please tell us about "Samsara".
A.: Samsara is the story of awakening of sexuality, love and liberations, it is a very passionate love story, you can say! The story revolves around a Buddhist monk Tashi, who emerges from three years of solitary meditation to find himself, experiencing a profound sexual awakening and a strong attraction to a beautiful woman Prema. This awakening then leads him to question the spiritual values of his monastic existence and he decides to opt out of the monastery into the secular world. Tashi then goes through the entire Samsara cycle which leaves him confused. The very question that gets raised in this film is – Is satisfying one thousand desires important when compared to conquering just one..

Q.: Why have you chosen DVD format to release your film in India?
A.: In today's era, I thought that the best way for this film to reach the masses is thro' DVD that will spread into the network and develop an awareness.

Q.: Are you satisfied with your job?
A.: Well, it is very difficult to come across a director who is very much satisfied with his job. Aspirations grow on, and in my case, I can say that I am not that pleased with the critical success that my film has acquired. I will be glad if I get successful commercially, while keeping my integrity and dignity intact.

Q.: Which kind of story do you prefer for your film?
A.: India is a nation where there is no shortcoming for stories. I actually feel really bad to see few directors copying films from outside. I ask, is there a need to do this? We are in a nation where every house and every Indian village can give us a story.. Just look into what you have,!

Q.: Have you also tried the same for your film?
A.: Yes, it shows in the results I have got today. In fact, when Samsara was made in Ladakhi language, I never believed that the film could travel so far. When the film was released in more than 100 theatres by Italian, Thai and French people, with 3 shows per day, I was really apprehensive, but I am glad that the film was able to reach all houses there.

Q.: What is next?
A.: I am working from a long time on a work inspired from the life of Gautam Buddha. I am working on the cast as of now, and have approached Aishwarya Rai Bachchan for the role of Yashodhara too.
(SAMPURN)