Karan Grover and Kavita Kaushik are the next to go from Nach Baliye 3. 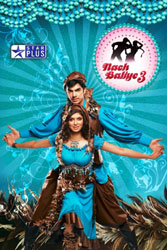 Featured Video
His chocolate boy looks and tremendous female fan following didn't help when it came to continuing in the contest. Karan Grover and his girlfriend Kavita Kaushik are the next jodi to be eliminated from Nach Baliye.

Karan is a non-dancer, and despite trying hard to match his steps up with Kavita, had ended up in the danger zone last week. The couple took their ouster sportingly with Kavita saying that it had got her closer to Karan and that she was lucky to have him in her life.

So far, the viewers seem to be voting as per the judges scoresheets. This week, estranged baliyes Shahid Kapur and Kareena Kapoor are the celebrity guests to promote their upcoming film Jab We Met.

+ 3
14 years ago this is one reality show where the eliminations are up to the mark except for vikas-amita.....but ppl get ousted excatly how the judges score them....i hope havnt jinxed it now ..my bad

Cute Zooni 14 years ago OoOpSsss... weLL beSt oF LUck tO boTh fOr their up cominG future...

14 years ago Oops this is so sad. i thought they would go far.

amal 7leh 14 years ago very sad for karan but better luck next time..

+ 4
14 years ago Really suprising...as Karan Patel(Robbie)and his partners are worse....