After playing various roles in television soaps, the hot hunk of the television industry, Chetan Hansraj is now fighting a battle in 9X’ Kaun Jeetega Bollywood Ka Ticket. Along with this reality show, Chetan will also be seen as Bheem in Ekta Kapoor’s Kahaani Humaarey Mahabhaarat Ki. 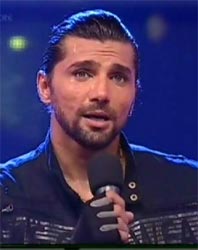 Featured Video
“It is a very nice experience and is interesting to do something different”, quips the actor. Reality shows and controversies go hand in hand and recently Chetan was seen raising his voice against Puneet, as he was rude towards the judge. “The contestants definitely have to concentrate on their performance rather than showing attitude on the show. I just want to tell them to take this show seriously because we will be working in films which is not an easy task”, advices Chetan.

This advisor is also a great friend of all the contestants and celebrity contestants. “I get along well with everyone. I have worked with many of these participants starting from Mihika to Vikas. So, I don’t have any issues”, quips Chetan. Having said this, the actor is quite happy that trouble makers Twinkle Bajpai and Puneet have walked out of the show. “Their antics have given me and others contestants a rise in blood pressure level. What arrogance and that too from some body who has done nothing in life, and Puneet is Bajpai’s lap dog who follows her blindly”, points out Chetan.

The actor was one among the few who questioned Twinkle when she called it a ‘Quit’ as soon as she reached bottom three. “How can you question the format only when you are in the bottom two? Did you not vote others out??”, asks he. What really irked Hansraj were Bajpai’s comments on Panchi Bora's background. “You can’t get personal about anybody. And in Mr. Bora's case, it was worst as he is at a senior post in the Indian army. She did not even stop there; she even attacked Mihika Verma about her being insecure and made her weep as well”, quotes Chetan.

Ask him whether they might get back into the show and he says, “It will talk a lot on their self-respect if they do. The show will be sugary in their absence. I agree such shows generally instigate fights but this type of nautanki was something which even the channel did not expect”.

When asked him to describe the four mentors in one word, this is what Chetan had to say, “For Amrita Singh’s strong image I would describe her as Punjabi Khudi. Mahesh Manjrekar is deadly; Shabanaji is full of mannerisms and Zeenat Aman very Elegant”.

Chetan is equally excited to play the role of Bheem in Ekta’s Mahabharat. “Bheem was the most powerful and also the strongest character in Mahabharat. It feels very nice as everybody doesn’t get chance to play such a character”, quips the actor. There have been criticisms that the characters look like Greek Gods with less of armor. How do you justify them? “I like the look. Why should we always expect the same looks like other mythological serials? This is a different Mahabharat. How do people know what these characters used to wear during that era? There are neither proofs nor pictures which can describe them. We don’t know how things were, so it’s fully justified”, clarifies he. On the mixed response the initial weeks of the mytho garnered, “But TRP's are high and I think people are used to watching the old version while this is completely a new look that is given to the show. It will take time for people to accept”, says the handsome hunk as he ends.

14 years ago oh plzzz sitaa!! jus coz u like twinkle doesnt mean tat she's alwys right!!
she din hv ne right to tell mihika to shut up n tlk abt panchi's fam bgrnd.. who de heck does she think she is!! if she doesnt chnge her manners, m sure she cnt get a single break in bollywood..thre r lots of oder actresses who r way better dan her..
chetan has been in dis industry for hell outta time but he knws how to act diligently.. if she was gud wit oder ppl. evn dey wud hv been gud.. she din evn give respct to seniors like zeenat n shabana.
n u r blaming chetan for all dis.. hellowwwwww wakey wakey!!

+ 4
14 years ago how so ever rude was twinkle but chetan & karan crossed all their limits of decency ,& i don't think so tht twinkle was talking to chetan & karan in tht rude way ,why these guys were speaking on behalf of tht rude gal mihika ?? mihika has her own mouth ,she cud hv talked to twinkle on her own ,but chetan & karan showed their class by their cheap & un-justified behaviour & chetan -karan u guys really need some lessons on mannerisms & how to talk wid a lady !!!!!!

14 years ago twinkle showed her class through her behaviour to all...Chetan is justified..!

+ 2
14 years ago If she was a lady, she would know how to talk to others. I'm female, and I find no qualms about the way Chetan was speaking to her, you reap what you sow.
Twinkle is even rude to another female, telling Mihika to shut up like that. I mean.....Chetan and Karan are humans also, just because they are men, doesn't mean anything. They have been decent with her, but they also have their limits.

I have never heard anything bad being said about Chetan and Karan, but Twinkle's stupidity has always been popping up.

14 years ago Chetan and others are working in this field for long time and so far I did not hear anything bad about their behaviour. Sorry, can't say the same for Twinkle, she made mess everywhere she worked be it Sa re ga ma, Betiyaan or LKJBKT.