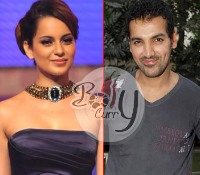 stint in the first of Dhoom series. This time, as Manya Surve in Balaji's upcoming flick Shootout At Wadala. Cast opposite Kangna Ranaut, whose early critical acclaim is becoming a more debatable subject nowadays, John is heard to have tagged their pairing as "unique".

But the uniqueness of pairing is not all he's banking on. The macho actor is currently busy brushing up his street Marathi speaking to play the author-backed role. A character inspired by the life and true story of Marathi underworld gangster, Manohar Arjun Sruve, who died in an encounter in 1982.

A White Feather co-production, Shootout At Wadala, has been written as a prequel to the 2007 flick Shootout At Lokhandwala and revolves around the first ever police encounter recorded in the Mumbai police history in 1982, almost a decade before the Lokhandwala shootout. It is among the most ambitious multi-starrers of the year and is slated for a December 7th release.