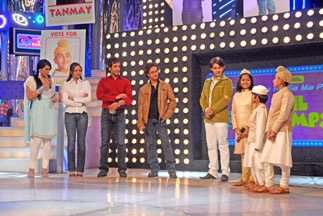 Featured Video
SaReGaMaPa L’il Champs is just a step away from the Grand Finale. As the finale is drawing closer, the excitement, confidence, vigor and enthusiasm amongst the participants is on the high. After struggling it out through the different rounds, the final three finalists - Punjab-da-puttar Rohanpreet; Mariyani Assam ki Anamika Chaudhury and Lucknow ke chhote Nawab Tanmay Chaturvedi will battle it out in the grand finale. All three of them have their individual USP’s and are just as good as the other. Along with the rise in mercury, even the suspense and pressure on these little Maharathhi’s is building up. They are all geared up to give their best performances and win the whopping amount of 25lacs along with a luxurious Hundai 'i10' car. 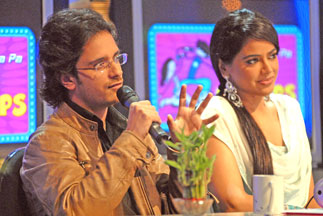 This Friday on 22nd February, in the pre finale episode, hot and happening celebrity guests - Sameera Reddy, Esha Deol, Tushar Kapoor and the current singing sensation Raghav Sachar come to cheer the L'il Champs on the sets. It was a fun filled experience with the Li'l champs wooing the stars and the audience for their coveted votes. Also present will be the heartthrobs of Sa Re Ga Ma Pa Challenge 2007, Aneek Dhar, Mouli Dave and Raja Hasan; each of them rendering their support to their favourite Li'l champ along with duet performances. The awesome foursome celebrities were too delighted to be on the show and tried to share the microphone with the Li'l singers. 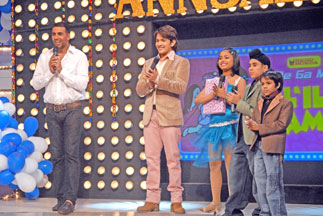 On Saturday, 23rd February, the celebrity guest is none other than the debonair hero - Akshay Kumar. The dashing and super-busy superstar, who had a very successful 2007, was not only gracious enough to spare sometime for the Li’l champs but he also went all out to cheer for them! Along with Akshay another special guest Tejaswini will be visiting the sets. Tejaswini is physically challenged and hails from Chandigarh. She is a crazy Akshay Kumar fan. Akshay obliged her with a special performance on the super hit song "Hare ram hare ram" from the movie 'Bhool Bhulaiya'. The Lil champs will give some brilliant performances and go all out to impress Akshay and present a memorable musical evening.

This week the three finalists leave no stone unturned to catch viewer’s attention. While these little kids toil hard to meet and rise above the expectations of viewers and also give some memorable performances, they need something from the viewers too.

At this juncture, all they need is viewers’ blessings and support. They need the votes to help them emerge victorious. So please don’t forget to cheer and vote for your favourite Li'l Champ and help build their glorious future.

To catch all these actions, don’t forget to tune in to Zee SaReGaMaPa Li’l Champs on Friday 22nd February and Saturday 23rd February at 10 PM IST.

14 years ago no offence. but what is anamika wearing????? that dress doesn't look appropriate for a child, what was the head dresser person thinking?