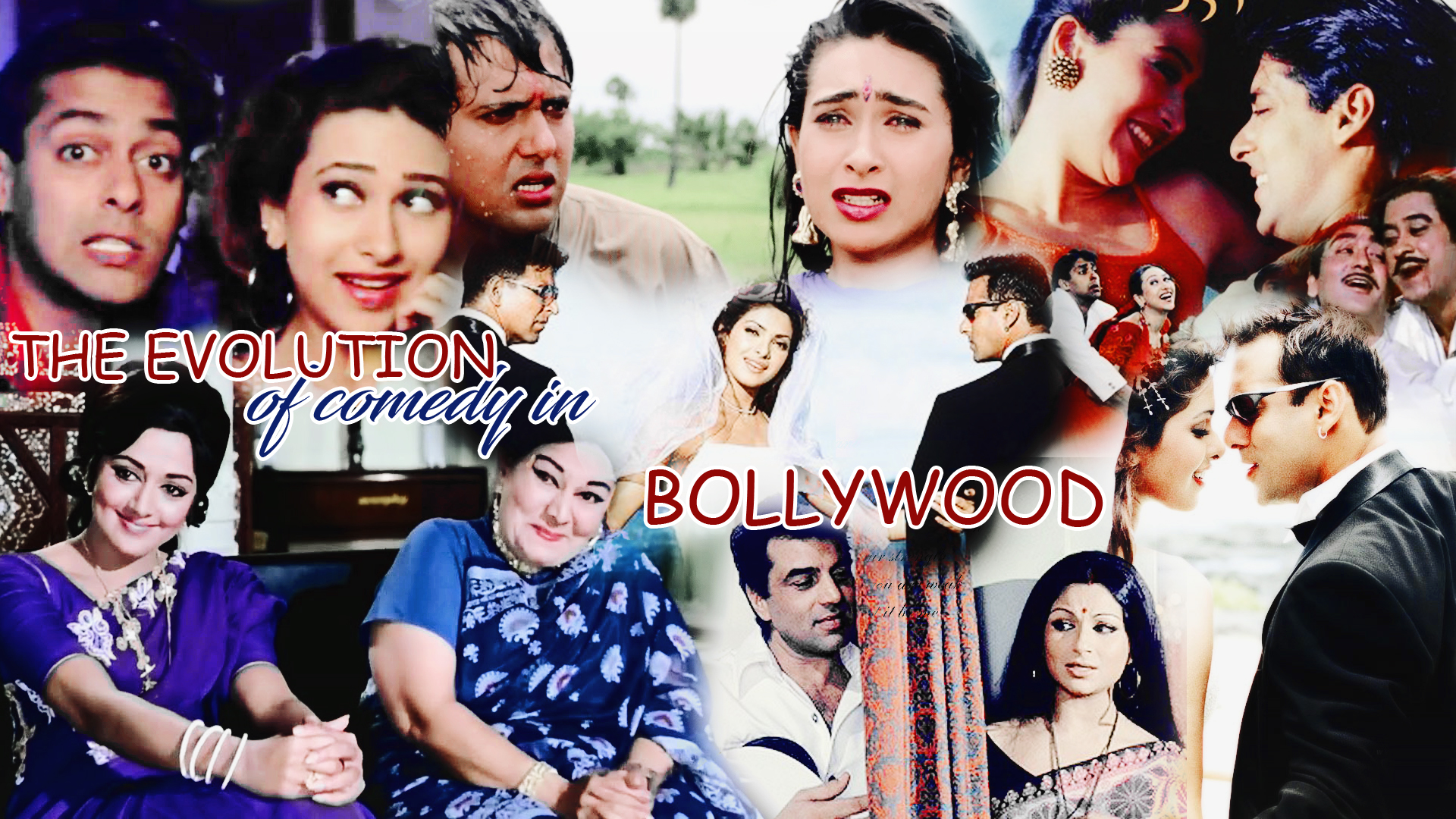 Comedy. Ah, the one constant of life. Imagine you wake up in the morning and accidentally turn your shower on scalding hot. Then you burn your hand by dropping hot coffee on it. You get to college only to find out it is closed due to a broken waterpipe or you get to work to find that the Internet is down. Pretty rough day, ain't it? Well what would you turn towards, to lighten the mood? We know we would turn to some comic relief and we bet you would too! But have you ever stopped to muse about what Bollywood has done to comedy over the years? Well we, at India-Forums, have, and today we present to you the evolution of comedy through the ages.

The 1950s to early 1980s were the years of predominantly one style of comedy: situational comedy. Whether it was Johnny Walker singing "Sar Jo Tera Chakraye" or Kishore Kumar's hyper-enthusiastic characters, this long period of comedy in Bollywood was relatable and always about the common man. Watching Sunil Dutt play a simple, innocent man aptly named 'Bhola' in Padosan (1968) was enough to make people laugh as he blundered around in an attempt to please the classy and beautiful Bindu. What made this period so well-liked was that the humor was part of everyday life without any forced comedy or outlandish situations. Along with enticing laughter from audiences, this period of comedy also taught valuable life lessons like Bawarchi (1972), which taught people the meaning of family and importance of spending quality time with one another. The success of comedies in this era created numerous wonders which have achieved cult status. The comedies of errors Seeta Aur Geeta (1972), Chupke Chupke (1975), and Angoor (1982), all played on mistaken identities and twins/triplets to an extreme, yet remained true to the situational comedy scenario.

Of course, like all good things, this era slowly came to an end as we moved into the 1990s and heralded the harassment phase of comedy. Yes, the harassment phase! Movies like Aankhen (1993), Raja Babu (1994), Dulaara (1994), Coolie No. 1 (1995), and Judwaa (1997) began to top the charts. These movies relied on harassing and teasing a woman to make the general populace laugh, all the while calling it love. Whether it was the song "Oh Laal Dupatte Wale" from Aankhen (1993) or Raja being unable to control himself from hitting a woman on her backside in Judwaa (1997), these movies made it comic to stalk and harass a woman. However, that's not to say that regular comedies didn't do well. Movies like Biwi Ho To Aisi (1988), Hum Hain Rahi Pyar Ke (1993), Andaz Apna Apna (1994), and Chachi 420 (1997) created ripples of their own. Many of these latter movies went on to become cult classics and are in many ways more memorable than the former category of movies. Even today Crime Master Gogo's classic "aankhen nikal ke gotiya khelta hoon" and Banwarilal Pandit's idiocy make people laugh wholeheartedly.

As we moved into the 2000s, comedy in Bollywood seemed to return to its roots with situational comedy making a return, with movies like Hera Pheri (2000), Hungama (2003), Hulchul (2004), and Mujhse Shaadi Karogi (2004). Baburao Ganpat Rao Apte blundering through life was relatable because he was the typical family man, who spends years going to and from work, works up a debt, and then upon retirement just wishes to live a peaceful and debt-free life. Even the angry Sameer learning to control his anger through the antics of the arrogant Sunny was relatable and made one smile as he trudged through situation upon situation. Yet this period also introduced new types of comedies, in particular, adult comedies and cross-dressing comedies. Some did well, some not so much. The Masti series, which have become more adult in nature with each passing movie, is one prime example of adult comedies. Dialogues and scenes with double meanings and innuendos have become the norm, with just a dash of plagiarism thrown in for good measure. Aftab Shivdasani emerging from the back of the cow in Grand Masti (2013) is a direct copy of a comic scene from Pet Detective (1994). We also have movies like Apna Sapna Money Money (2006), Paying Guests (2009), and Humshakals (2013), which attempted cross-dressing comedy and failed miserably. In fact, Humshakals did so poorly that even the actors washed their hands of the movie citing it was a stupid decision on their part. After all, not everyone could buy Ram Kapoor romancing a cross-dressed version of himself.

In recent years, comedy seems to have really grown as a genre as directors and producers have begun to experiment and produce out-of-the-box concepts. Whether it is a ghost comedy like Phillauri (2017), a social comedy like Hindi Medium (2017), a dramedy like Shubh Mangal Savdhaan (2017), a dark comedy like Newton (2017), or carefree comedy like 102 Not Out (2018), comedy has become the go-to for many filmmakers. Some do it successfully, like Rohit Shetty with his Golmaal series and his latest release Simmba (2018), while others have a way to go, like Kapil Sharma's movies or the Yamla Pagla Deewana series.
Comedy has certainly evolved over time, but has in many regards stayed the same throughout Bollywood history. Whether it was the situational comedy Chupke Chupke (1975) or the carefree comedy 102 Not Out (2018), comedy movies sure know how to tickle the funny-bone, some doing it successfully and some not so much. However, as the cinematic moviegoers' tastes and opinions change, comedy will certainly have to go through changes as well. The regular slapstick comedy, cross-dressing, and double meaning dialogues will not work any longer as is evident in the negative reviews and critiques of movies like Besharam (2013), Gang of Ghosts (2014), and Humshakals (2014). Rather movies will need to become socially relevant with a meaningful story and good acting. Nonetheless, as we sign off, do tell us what your favorite comedy genre and movie is!