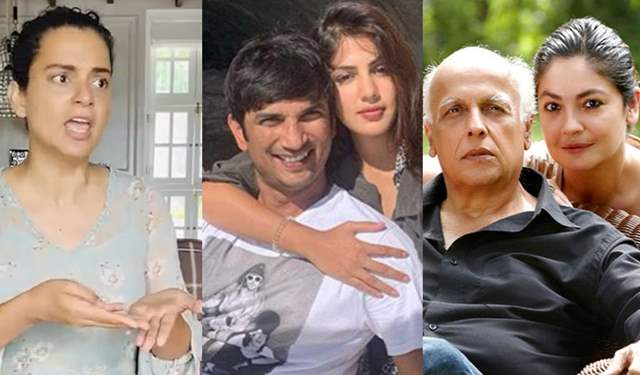 After the death of Sushant Singh Rajput, a lot has been spoken and written about Nepotism in Bollywood, and it still continues to be a debated topic.

Recently Pooja Bhatt took to twitter to talk about how their production house had launched many newcomers, and also took credit for launching Kangana’s debut film, Gangster.

Clearing details about her debut and Bhatt’s tweets, Kangana Ranaut questioned Pooja Bhatt on why was her father (Mahesh Bhatt) was involved in Sushant Singh Rajput and Rhea Chakraborty’s relationship.  Kangana also mentioned how she had two choices while choosing her debut film.

At the time of her audition for Gangster, Kangana had also auditioned for a south film named 'Pokiri', alongside Mahesh Babu, which was directed by one of the most legendary directors of the south film industry, Puri Jagannath.

Though Kangana was selected for Pokiri, she went ahead and chose Gangster, as she had already started shooting for the same. Kangana also mentioned how Mahesh Bhatt had humiliated her, called her mad and announced her tragic death, just like he had also predicted Sushant’s end.

Kangana's team posted a series of tweet on behalf of the actress. Their statements reads, "Dear Pooja Bhatt, Anurag Basu had keen eyes to spot Kangana’s talent, everyone knows Mukesh Bhatt does not like to pay artists, to get talented people for free is a favour many studios do on themselves but that doesn’t give your father a license to throw chappals at her.....call her mad and humiliate her.

He also announced her "tragic end", Also why was he so invested in Sushant Singh Rajput's and Rhea’s relationship? Why did he announce his end too, some of the questions you must ask him (Folded hands emoji) Pooja Bhatt.

For your info Pooja Bhatt Kangana had also auditioned for Pokiri, alongside Gangster & got selected for that as well. Pokiri went on to become an all time blockbuster, so your thinking that because of Gangster she is who she is, is totally not working. Water finds it’s level (Folded hands emoji).

Here are the series of tweets from her team's official handle:

RapChick101 1 months ago Lmao pooja Bhatt is high key dumb for defending her dad on something she knows he’s wrong with. I mean everyone loves their own parents so I get it but she could’ve literally just silently been her dad instead of all this