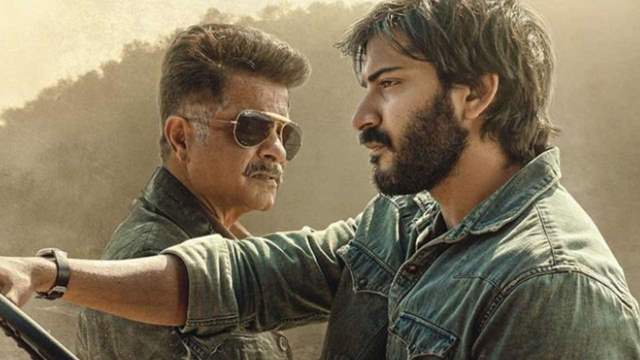 We will see Anil Kapoor back in action alongside his son Harsh Varrdhan Kapoor in a Netflix original, titled Thar. The trailer of the film was launched today at a grand event in Mumbai. Present at the event were Anil Kapoor, Harsh, Fatima Sana Shaikh, Satish Kaushik, director Raj Singh Chaudhary.

The trailer seemed quite intriguing as it takes you to the dark lands of Thar desert of Rajasthan. Anil and Harsh seem to have a bunch full of secrets in the film. A crime has occurred there and Anil Kapoor and Satish Kaushik can be seen as cops trying to figure out about the strange murder which has transpired in their area.

Harsh Varrdhan has a very piquing role and he deals in Antics. Everyone has a common goal which is to entrap the murderer. From the setting to the mood, everything seems to be placed perfectly and one can sense the thrill unfolding as you watch the complete trailer. Anurag Kashyap has also been a part of the dialogue writing process of the film. Sharing the trailer of the film Sonam Kapoor captioned it, "this film isn't about the bad guy. Maybe the good guy is behind this. Or who knows? It could be the heroine."

Talking about his experience as a debut producer of the film, Harsh Varrdhan exclaimed,

"It just happened by chance. Earlier, it was Vikram Aditya Motwani who was supposed to produce this film."

Anil Kapoor had earlier mentioned that Thar was pitched by his son to him and Harsh wanted him to be a part of it. The film is set to be released digitally on Netflix on May 6th.