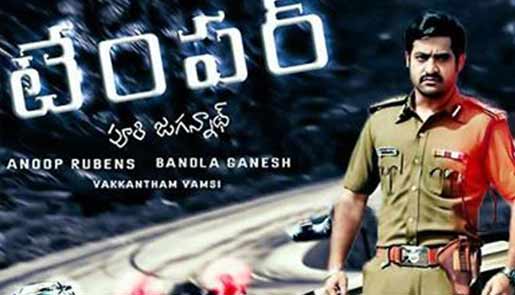 Puri Jagannadh's heroes are eccentric with shades of grey. They're highly romantic and occasionally patriotic too. Puri likes to highlight the eccentricity in his heroes, say a Mahesh Babu in "Pokkiri" and "Businessman" or Pawan Kalyan in "Cameraman Ganga Tho Rambabu" with a purpose, and that has worked in his favour in all his stories, including in his latest outing "Temper", about a bad policeman who gets transformed over an incident.

NTR plays Daya, an orphan, who grows up to become a police officer because he believes it's the only legitimate job in which he can make as much money as he wants and nobody will ask him questions. He considers himself an animal, which he is, because he's heartless (he introduces himself as a man with no sympathy) when he forces the owner of a property (worth Rs.5 crore) to sell it at a much lower price and tells a heartbroken mother that her daughter might have eloped when she comes to file a missing person complaint.

Daya is accompanied by an honest and self righteous police constable Murthy, played fittingly by Posani Krishna Murali, and this character reminds us of his inner conscience. If Daya had an inner voice, it'd be like Murthy, who wouldn't salute him because of his bad deeds and wishes for a tsunami (a metaphor) to come and sweep him away.

Although Puri's stories are cliched, his characters offer viewers something different in all his films. In one of the best scenes in the film, a young Daya is told by his caretaker that the only difference between them (small-time crooks) and a bad policeman is the khaki. And when Daya eventually becomes a policeman, he avoids wearing the uniform because deep down, he still respects it but not the job so much, not the system and people who control it. The only time he wears the khaki in the entire film is after he's transformed for good.

There are some good as well bad moments in the film. In a touching scene, when Daya gets the old man his property back, he feels sorry because he never had anyone in his life to show him right from wrong. He goes on to tell him that as a growing up orphan he was always bothered about merely living than ever concerned about how to live. These subtle touches by Puri strike the right chords and make you root for the antihero.

NTR is at his best in "Temper" and his performance is nothing short of spectacular as Daya. While the transformation doesn't come as a surprise, the variation he brings to his character through the dialogues, attitude and mannerism, is outstanding. Prakash Raj is no longer the villain you once loved. He's been reduced to a comic villain and he's starting to get stereotyped in these roles. He's no longer the villain who strikes fear in the hearts of the viewers but he's just the bad guy, who'll end up making you laugh at his weaknesses.

Some of Puri's lines are unmatchable and give you a high when delivered by NTR. It's his stories that don't excite much as they're mostly recycled.

"Temper" turns out to be a regular Puri Jagannadh film salvaged by NTR's terrific performance.