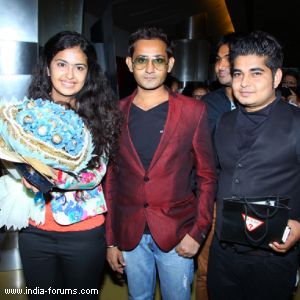 Avika Gor the busiest youngest actress of Television who is making her debut in regional cinema with a Telugu film, Uyyala Jampala directed by Virinchi Varma. On the special screening of the movie she was seen celebrating her birthday with Yuva Bharat Express Magazine team and the presence of the entire cast of her television shows Balika Vadhu and Sasural Simar Ka who turned up to wish the actress.

With a successful TV show Sasural Simar Ka (SSK) currently on air besides that, she is also trying her hand at the various aspects of film-making such as scriptwriting and editing. Avika was also wished and greeted by the people who were associated with her while working. Yuva Bharat Magazine Kamlesh Parmar and Hitesh Kaneria also made their presence.

Avika Gor said, "I am doubly happy that my film and my birthday have coincided with the screening of my best film ever. I am feeling very happy. I am excited and nervous too.  It's my debut and a cute love story about a boy and a girl who are childhood friends. I play a 17-year-old college girl who dreams about her future and her Mr Right. It's just the beginning; I have a long way to go."

Television actress Shivshakti Sachdev wished Avika best of a luck for the future. Sasural Simar Ka co-actor Manish Raisinghani said that they were all here to celebrate Avika's birthday and her foray into Telugu cinema. Avika Gor thanking her fans for their wishes she concluded saying, "I just want them to love me as much as they do right now. It's because of them that I am who I am today. I just need your blessings and love."

Ashiesh Roy's sister Conica Halder: I don’t have the heart to tell ...

pranurosid 6 years ago love u Avika Gor n Manish Raisinghani.u both rock as rosid,d cutest pair ever in tellywood.luv u both.

A-Musing-Me 6 years ago Avika Gor you are a powerhouse of talent...
N u and Manish Raisinghani are brilliant together...Thanks guys for making ROSiD amazingly beautiful

srdevi 6 years ago Love u Avika Gor, and your pairing with Manish Raisinghani is awesome

Avika.Gor 6 years ago Avika Gor and Manish Raisinghani rocks love u guys. Hope that cvs will give to us more ROSID.