Dozens of protesters barged into the shooting area and set fire to the sets and two vehicles in the district, about 100 km from here. The actors and other artists had to run for cover. Police said no one was injured in the incident.

This was the third attack by pro-Telangana groups on film shootings in and around Hyderabad in as many days.

As the Telugu film industry is dominated by the Andhra region and some leading actors have opposed formation of Telangana state, the Telangana protesters are targeting their films and shootings.

Protestors had Wednesday attacked the film shooting of Allu Arjun, nephew of actor-turned politician Chiranjeevi, who has been campaigning for 'United Andhra'. They had damaged the equipment while the actor and other members of the unit ran for safety.

Activists of Telangana Rashtra Samiti (TRS) Tuesday disrupted the shooting of the film of actor Manchu Manoj, son of veteran actor Mohan Babu. Manoj, his sister Lakshmi Parsanna and other artists of the yet to be named film escaped unhurt.

The TRS workers were protesting Mohan Babu's remarks opposing the proposed division of the state. 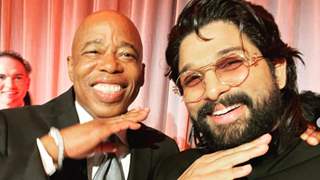