Teen Patti is one of those films that leave you speechless.

Here, is a film that tries to explain the human tendency to search for an order or a pattern in the most of random things. The logic behind betting and gambling, which is considered a show of bravado and stupidity by others. 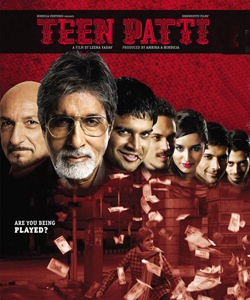 We have Professor Venkat Subramaniam (Amitabh Bachchan), whose research papers on mathematics have been getting rejected over years. This professor, by chance breaks a code that gives him the power to get more than an edge over others at a game of Teen Patti. Well, that's what he knows, but he wants to test it out. Egging him is another Professor Shantanu Mukherjee (Madhavan), deep in debt and ready to risk anything, take any chance to get himself out of the mess.  Oh, but this experiment needs more volunteers, so they randomly pick up three students Sid (Siddharth Kher), Bikram (Dhruv Ganesh) and Aparna (Shraddha Kapoor) for help.

Once everyone gets the taste of easy money, everyone except Professor Subramaniam is hooked on to it. He refuses to take his experiment to the smoky gambling rooms anymore. But, he has to give in to a threatening phone call asking him to so. And thus, the brewing of a heady cocktail of gamble, money and mathematics begins.

Apparently, this group of five is not so good at keeping their experiment a secret. So rich guy looking for excitement Abbas Sheikh (Vaibhav Talwar) follows two of them and then wants to be a part of it. He reasons he can take them to places where real money is dealt with. When the stakes are raised, so are the risks. But in all this mad rush for money, half of it goes to the extortionist. So Professor Subramaniam wants to put a stop to it. 'So much money through one phone call? Just not fair,' he thinks aloud.

How this whole crazy ride comes to a screeching halt involving a lot of ugly consequences makes for the rest of the story.

The whole time the movie keeps you guessing. The pace is brisk. You keep looking out for the group's next game of Teen Patti.

Cool settings. Every location looks genuine. Right from Prof Subramaniam's cluttered home to the whacky artistic table over which the cards are spread.

Full of unconventional comedy; you can never guess and that would be the time a joke is cracked. Jackie Shroff as a playboy who has puppet for a pet and takes it along with him wherever he goes is an example. Also the scenes where they goof up real time at a gambling den are awesome!

Hats off to Hughes Winborne for the awesome editing. Thanks to that and the camerawork, various moods in the film have been beautifully brought out.

The film showcases massive performances of Big B and Madhavan. All the south Indian fans of Big B will be pleased to hear him mouthing a few lines in Tamil! There's a scene where Prof. Subramaniam walks out clutching his lungi tight… the gait is so typical of south Indian men, and you realize why Big B is one of the finest actors in this country.

Madhavan as the two minded, sly and hopeless debtor has crossed leagues with his performance. His scenes with Raima Sen are few but they make a cute couple!

Sir Ben Kingsley and his dialogue with Amitabh Bachchan come as a contrasting relief when the psychosis of swindling gets exhilarating. A perfect balance in this non-linear film.

Ajay Devgan's special appearance shows him as his brooding self and he's cool.

Sharaddha Kapoor is a natural at acting. We have a promising newcomer on board. Dhruv Ganesh is compelling too.

Some scenes are too similar to that in 21, the Hollywood film it has been inspired from. Although the Music is eclectic, it could've been better.

The newcomer Siddharth Kher seems clueless regarding certain scenes and Vaibhav Talwar hasn't been given so much scope.

Yes or No?
If you haven't watched 21, Teen Patti sure will set your adrenaline rushing. Definitely a good see!