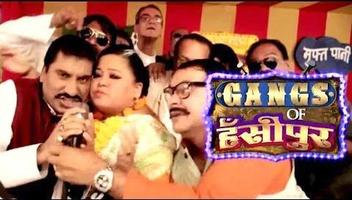 Zee TV's comedy show Gangs of Hasseepur focuses on the current topics which is projected in a funny way. The show has funny anecdotes, witty stand-up comedians and their satirical skits. Comedian Raju Shrivastav and Suresh Menon are gaining accolades for their comic timings and for their comic style and rib tickling punches.

The show makes spoofs of the topical issues as well as of the personalities which is quite hilarious and enjoyable.

According to the sources, "Ragini and Tanisha will be out of the show as the production house feels they are not that spontaneous and they can't be all time dependent on the script. As the stand - up comedy show is all about spontaneity in their comic style the show failed to live up to the audiences expectations.  The show will be undergoing a makeover and a new format will be seen. They have retained one of the Jury who is Mandira Bedi and a new face will be seen of Dr. Sanket Bhosale who is a Doctor, actor, stand-up comedian and an entertainer. Suresh Menon along with Sanket Bhosale will take place of Ragini for hosting in the show."

When contacted comedian Suresh Menon he confirmed the news saying, "Yes the show will have a new format. As seen earlier it was based on Political issues but now it will be just comedy of good time and yes Sanket and I will be hosting the show further. Ragini's contract has expired and so she is making an exit. The show will have a new host. As far as what I am aware of is Tanisha is having her date issues but I am not sure. Mandira Bedi will continue the show."

Further asking him the difference between the role before of a comedian and now as a host in the show he continues, "I like comedy in any form so I am enjoying even in hosting. It's a wonderful time to work with youngsters. All the gang remains the same and there is no such difference between acting and hosting as I have enjoyed before and still the fun is same."

Hope Gangs of Hasseepur can come up in minds of audience after its restructure.

nafeesaeed 6 years ago its good Tanisha has gone may b now it ll go better...she cudnt judge properly,cudnt give nice comment...hope for da best now...Mandra is doing v well.

Monstuholic4evr 6 years ago RockChicGirl: she wanted some publicity and the producer gave it to her... But I do understand your feelings about it

TheRager 6 years ago Who in their right mind thought Tanisha would be an apt judge for a comedy show?

Shehreen_27 6 years ago The show was not worth Ragini's presence... She is capable of doing something much better! How much more spontaneous could she be? The show itself is very lame..