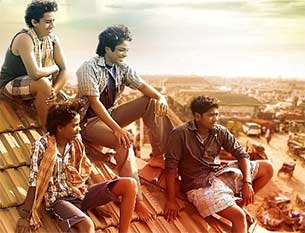 Featuring child actors in lead roles, S.D. Vijay Milton's "Goli Soda" should not be confused with a children's film. It has the innocence of Mani Ratnam's "Anjali", the bravery of Brazilian film "City of God" and the mischievousness of "Little Rascals", all laced together with the spirit of a Tamil film presented in a format audiences will cheer.

Take the four lead characters of this film; put them in a soda bottle and shake it until it explodes...that's "Goli Soda" for you. An entertaining tale of friendship that fizzes with irreverent humour and romance that instantly strikes a chord with the viewers.

Set against the backdrop of Koyambedu market in Chennai, the film's story is about four teenagers' pursuit for identity. Orphaned since birth, the four lead characters, best friends, work as porters in the market and they lead a complacent life.

The only adult in their lives is Aachi (aunt), their employer who makes them feel loved and cared. Having realized that the porter job doesn't promise them a bright future, the four friends, with the help of Aachi meet Naidu who owns the market. They seek help in acquiring a loan to start their own business. Naidu leases them one of his own shops where they start a hotel and soon start delivering food to over 350 shops in the market.

Just when the hotel starts to give these kids an identity to be associated with, an incident sets in motion events that change their lives forever. What is that incident and how much of damage does it cause on their lives? This forms the crux of the film's second half.

Most of us would see these kids as a gang, but the film shows us that they form a team so strong that separating them means doing something unthinkable. The entire premise is built on this friendship that translates wonderfully on screen from the opening scene to the brilliant climax fight sequence.

Director Milton spins a realistic tale, backed by engaging screenplay, around this friendship and gives us plenty of reasons not to just enjoy his work but even come back and watch it.

First featured in 2009 Tamil comedy "Pasanga", the four lead characters display maturity in their respective roles. You can see that they have grown by some extent and that's evident in their performance aptly supported by vigour and confidence. They make you root for the heroes in them but the irony is that they never display heroism throughout the film.

In a scene where they could run away from imminent threat, they refrain from doing so because one of them says, "we can't fight like adults, but neither can we run away because we're kids". It's scenes like these that make you root for the heroes in them.

"Goli Soda" is a slap in the face of heroism. It proves that the story is the real star of a film and it's precisely because of it that the entertainer emerges as a winner.

Milton as the writer, director and cinematographer gives us a slice-of-life story in the streets of one of the busiest markets in the country. He supports his story with well-captured shots, edited scenes and sharp dialogues that augment the film on the whole from an entertainment perspective. He extracts the best from his actors, especially from his lead cast, who make a great team. He makes us believe that the kids would eventually turn heroes in the end, but they only become stronger, braver and smarter.

If you want your thirst for entertainment to be quenched, "Goli Soda" guarantees that.