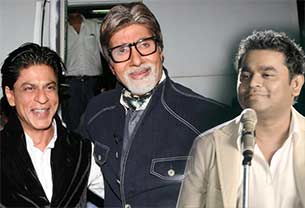 With divides like mainstream and parallel cinema, single screens and multiplexes, Indian cinema lives under a divide which is a deterrent to its own good, superstar Shah Rukh Khan said here Saturday, even as Amitabh Bachchan felt the need of the hour is to "blend in" to go global.

"Until we don't inculcate a habit of collaborations, we won't be able to inch towards global cinema," Shah Rukh said at the Solutions Summit, a conclave organised by NDTV to celebrate 25 years of its existence.

The actor said it is important to be able to give to the world what it understands, in order to be accepted.

Shah Rukh was joined on the panel with veterans like Amitabh Bachchan, Waheeda Rehman and Oscar-winning composer A.R. Rahman.

Rahman, who has created tunes for international projects like "Slumdog Millionaire" and "127 Hours", says he finds himself in a situation when different things are expected from him in India and in foreign shores.

"I have been a victim of this. What is considered to be good here, is not good there...I have to switch between the two. However, there are some things which are common as well," he said.

Amitabh, 71, who made his Hollywood debut with "The Great Gatsby" earlier this year, agreed with the fact that Indian cinema is unique, but added that we need to try and "blend in".

"It is obvious that our cinema is unique. We need to blend with the west in order to be global," he said.

Amitabh attributes this to the work of the current generation of actors and filmmakers, who are putting in efforts to make Indian cinema visible to the world.

"Shah Rukh Khan and Karan Johar are responsible in bringing commercial cinema to where it is now. The way they have marketed it has helped us a lot. I think that was a point when Indian cinema became global," he added.