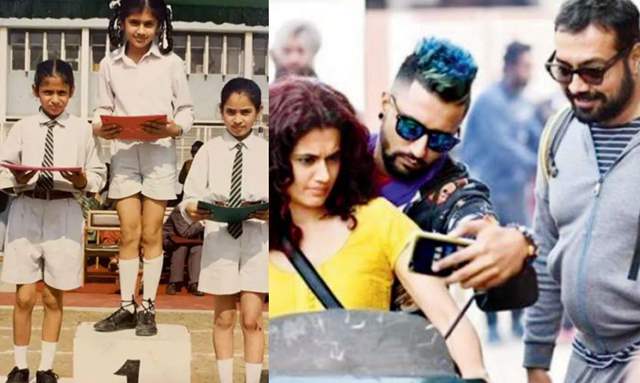 Taapsee Pannu took to her official Instagram to share a picture from her school days. The picture is from the actress’s school sports event and she can be seen standing on number one on the rank block. She emphasized on the importance of sports in one’s life and captioned the picture, "Sports have been an integral part of my life. School race tracks became my war zone every year and thanks to a supportive family and encouraging school teachers I could have my moment of glory. Unfortunately, many kids don’t have that support system #WhyTheGap @stc_india." But as soon as she posted the picture, her Maanmarziyaan co-star Vicky Kaushal and director Anurag Kashyap flooded her post with their witty comments!

(Also Read- Taapsee Pannu's Secret Story: From being called a Panauti to being Replaced in Films)

Kashyap will be producing Saand Ki Aankh co-starring Taasee and Bhumi Pednekar and shares a good rapport with the Pink actress.

Talking about the backstory of Taapsee’s post, she was nominated by her co-star Akshay Kumar who along with wife Twinkle Khanna had initiated a campaign #WhyTheGap through which they urged people to impart education to children, by sharing their stories on how education helped them in achieving success.

Akshay and Twinkle had earlier posted throwback images from their childhood and challenged their friends from the industry to do the same.

Twinkle Khanna began the hashtag #WhyTheGap on social media by posting her childhood picture, post which she passed on the challenge to her dear husband Akshay Kumar.

Soon Akshay posted a throwback picture captioning it, "Growing up I was always inclined towards sports and my mother would ensure I got nutritious home-cooked meals to fuel my passion. But it's a privilege that millions of street children do not have access to. 11,72,604 children in India can't afford even a single meal a day! It's time to ask #WhyTheGap with Save the Children India."

Mission Mangal released last week and starred Taapsee and Akshay along with Vidya Balan, Sonakshi Sinha, Sharman Joshi, and Kirti Kulhari has been receiving success on the box office. Taapsee will next be seen in Saand Ki Aankh, opposite Bhumi Pednekar, which is slated to release on 25 October, 2019.