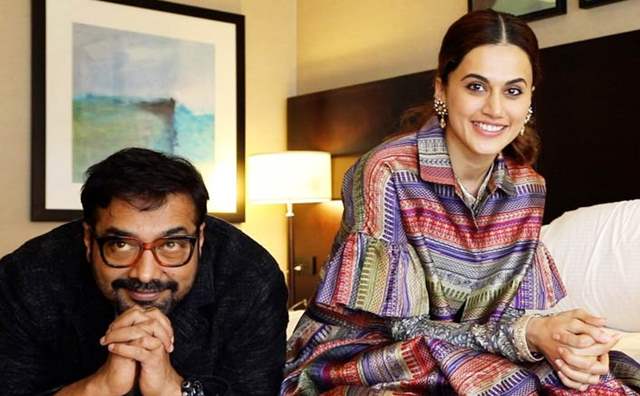 Filmmaker Anurag Kashyap has been accused of sexual misconduct by actress Payal Ghosh.

Payal took to her official Twitter handle and accused Anurag publicly as she said that the director forced himself on her. She also  tagged Prime Minister Narendra Modi to take action in this case.

Payal's shocking revelation has left the industry divided in opinion. While Kangana Ranaut stood in support of Ghosh, Taapsee Pannu was one of the first of many actors who defended Kashyap.

Anurag has received support from his industry friends and female actors who have worked with him including Taapsee Pannu, Radhika Apte and others. Kashyap's ex partners Arti Bajaj and Kalki Koechlin also came to his support after the allegations levelled against him by Payal.

In a recent interview, Taapsee opened up about defending the filmmaker.

“If he is found guilty, I’ll be the first person to break all ties with him" the actress told Mumbai Mirror.

She further added:  "But if the investigation is inconclusive, how can the sanctity of the #MeToo movement be sustained? How will real victims benefit from a power that’s come to us after years of suppression? It’s wrong for women to derail the movement. Abusing power isn’t gender-specific.”

Earlier, Taapsee had taken to social media to back her dear friend and filmmaker Anurag Kashyap, and even called him a 'feminist'. She had written on Twitter: "For you, my friend , are the biggest feminist I know. See you on the sets soon of yet another piece of art that shows how powerful and significant women are in the world you create :)"

Speaking of how Kashyap treats women with respect, Taapsee said: “Anurag has a lot of respect for women, never badmouths anyone even if that person hasn’t been kind to him in public. His is one of those rare sets where the number of women on the crew equals men, and they only have nice things to say about him. If someone has been harassed, let them initiate an investigation, let the truth come out."

Meanwhile, Anurag Kashyap's lawyer has issued a press statement and denied the allegations levelled against him.The statement reads: ‘My client, Anurag Kashyap, has been deeply pained by the false allegations of sexual misconduct that have recently surfaced against him. These allegations are completely false, malicious and dishonest. It is sad that a social movement as important as the #metoo movement has been co-opted by vested interests and reduced to a mere tool for character assassination. Fictitious allegations of this nature seriously undermine the movement and seek to unconscionably trade upon the pain and trauma of actual victims of sexual harassment and abuse. My client has been advised about his rights and remedies in law and intends to pursue them to the fullest extent - Priyanka Khimani.”

basherz 27 days ago how does it matter to common people whether she breaks ties with Anurag or not ?