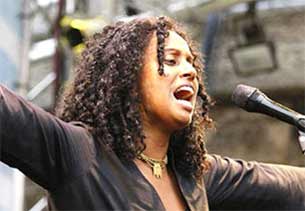 Indian British musician Susheela Raman has launched her sixth studio album titled "Queen Between". It features some of the great artists from across the world including some known faces from both India and Pakistan.

"'Queen Between' is a new chapter in my work and I'm really excited to share it. It's an album really about songs and voices, but the musical landscape is very dynamic and psychedelic. I am so privileged to collaborate with so many great artists from across the world," Raman said in a statement.

"I think this album has a great potential to connect with an Indian audience and I have been getting amazing reactions so far. It was also great that we used a crowdfunding site (pledgemusic.com) to fund the album. It's a new kind of relationship you can have with the audience," she added.

The album features musicians from Pakistan including the Rizwan-Muazaam qawwals who are also Nusrat Fateh Ali Khan's nephews, Rajasthani master musicians like Kutle Khan, Nathoo Lal Solanki and Rana Ram Bhil, the great cellist from France Vincent Segal and other collaborators from France and Britain.

According to musician, the overall feel of "Queen Between" is acoustic, live and organic but very powerful.

The album showcases Raman's bizarre voyage into different musical worlds and styles which draw their rhythmic sense from South Asian and African origins.