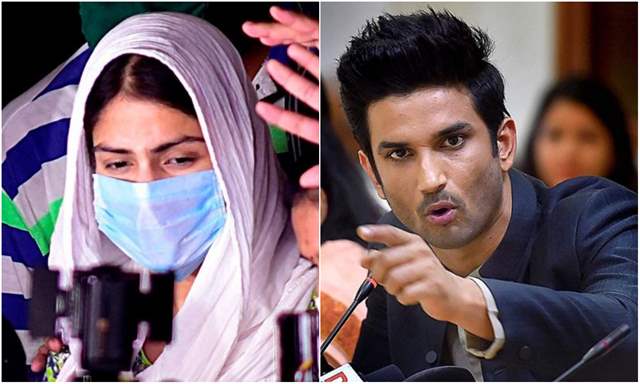 On Tuesday, the judicial custody of Rhea and Showik Chakraborty was extended for two weeks, upto October 6 2020. In response, the actress' legal team filed for a bail plea in the Bombay High Court.

The bail plea was scheduled to be heard today but now stands postponed to tomorrow, 24 September due to heavy rains in Mumbai city.

Several details of Rhea's bail plea have come to notice. According to Times Now, the actress alleged Sushant of smoking cannabis cigarettes and stated that he sourced them for himself.

As per the report, Rhea Chakraborty has alleged in her bail plea that her late boyfriend Sushant used to 'smoke cigarettes containing ganja which he sourced & procured for himself'.

Rhea also added that she was concerned about Sushant's alleged drug habits and when confronted him, he allegedly informed her that he had developed a 'deep liking' for the cannabis cigarettes during the shoot of Kedarnath.

Rhea's bail plea also highlights the June 2019 molestation incident where she claimed that Sushant's sister Priyanka Singh misbehaved with her under the influence of alcohol. Rhea has spoken about this several times in her statement and had stated that this led to differences between the actor and his sisters.

In her plea, Rhea has stated that Sushant's eldest sister Neetu had called and threatened him that she would file a false criminal case regarding his altercation with Priyanka.

"Sushant was extremely disturbed by this incident as his sister Neetu's husband is an IPS office and he was concerned that they would misuse connections to "coerce and threaten" him" reads an excerpt from the statement.

Rhea has further stated in her bail plea that she had reached out to OP Singh and Neetu that to resolve matters, and claims that she informed them that she would go to the police about the molestation incident if they filed a false case against Sushant. As per her, this step 'seemed to scare' Sushant's family.

Rhea also made mention of the Europe trip and claimed that Sushant was "anxious and disturbed". She claims that Sushant had shared with her about a similar incident that he had in 2013 and was treated by Dr Harish Shetty back then.

Speaking of changing apartments, Rhea said that it was Sushant who told her and manager Shruti Modi to  to look for other apartments as Capri Heights was haunted.