Imagine's Do Hanson Ka Jodaa, produced by Rajshri Productions is headed for a major twist in the coming episodes. 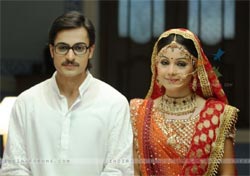 As per the present story line, Tauji (Pankaj Berry) of Ritu (Praneeta Sahu) is hell bent on troubling Suryakamal (Shaleen Bhanot) and Preeti (Shubhangi Atre), so that he can get their house transferred in his name.

We hear that the show is all set to get into a new phase, which will kick start with the unfortunate death of the lead protagonist, Suryakamal.

An inside source tells us, "There was nothing much to play with, in the character of Suryakamal. His character has grown to be a person who is next to God. So there had to be a big change in the story line to keep the audience glued. Suryakamal will be killed very soon by Tauji and his goons. This will leave Preeti shattered".

The death of Suryakamal will open up a new chapter in Preeti's life, wherein she will be subjected to torture by Ritu's family.

So does it mean that Shaleen Bhanot will no more be part of the show? Well, before you jump the gun, let us tell you that Shaleen will be back very soon in a new avatar, as a completely new character.

Our source further said, "Shaleen will be back in the role of a con man, an extremely colourful character unlike Suryakamal. He will be a guy who is capable of duping a person for money and luxury. One fine day, an utterly shaken Preeti bumps into him and is shocked to see a look-alike of her husband. She then decides to take the help of this man to avenge the family of Ritu and throw them out of her house".

Will the look-alike of Suryakamal be able to bring back happiness in Preeti's life? Will they go on to be the new 'Do Hanson Ka Jodaa'? Only time will tell.

As of now, we hear that Shaleen has already shot for the promo of Suryakamal's death. The creative team is presently working on the new look to be given to Shaleen.

When contacted, Shaleen Bhanot gave us an impression that he had never heard of such a development, and refused to talk.

We tried contacting Producer Kavita Barjatya, but could not get thro' to her.

Let's wait and watch as the major drama unfolds in Imagine's Do Hanson Ka Jodaa..

10 years ago They just turned it into another typical Indian show! What a BIG clich!

Inderjeetbedi 10 years ago They have destroyed the show by killing the main protagonist.. Cvs should atleast respect their title.What is meant by Do Hanso Ka Joda if the male protagonist(Suryakamal) is killed.The show has been destroyed.It Used to be a good show but now ....

0rose.cutiee0 10 years ago hey dont do that....
i love suryakamal. please dont kill the only person we love in DHKJ. He has been holding the family together. If he goes..the family will get shattered.
Kill Ritu for all we care.
I love DHKJ and it breaks my heart to know that anyone could even thnk of killing our SK....

10 years ago Incredibly LAME! Looks like they too have to resort to women torture for TRPs. An immense shame that Indian TV still doesn't have the integrity to deal with a sensitive issue properly in all these soaps like pratigya etc.

10 years ago Suryakamal will be back very soon in a new avatar, i think without glasses and mustache with hairstyle, body style. Like Raj Kapoor(Sharukh Khan) in Rab Ne bana Di Jodi. I will mis the love between Preeti and Suryakamal....... And after some time, Preeti and the new Suryakamal character will be in love, i think..

pradeepraghavan 10 years ago I think this is going to be interesting!