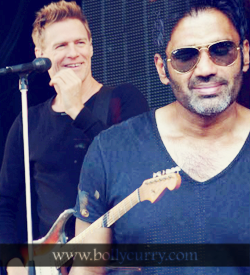 Suniel Shetty has always been the ideal son-in-law when it comes to supporting his mother-in-law. He's always supported NGO 'Save The Child' in memory of his late mother-in-law. When it came to his wife Mana asking him to support her with Bryan Adam's concert, it would only made sense for him to say yes.
In fact, Suniel Shetty has always been a big fan of Bryan Adams; he's even attended many of his concerts in the past and claims to know many of his songs by heart!
Suniel has now decided to tour India with this Canadian rockstar when he comes to the country in February of 2011 to visit Mumbai, Hyderabad, Delhi and Bangalore.
Here's wishing that both Suniel Shetty and Bryan Adams, including their audiences, enjoy the rocking tour!
3 Likes

Mirzapur star Divyenndu opens up about his Journey from ...
19 minutes ago