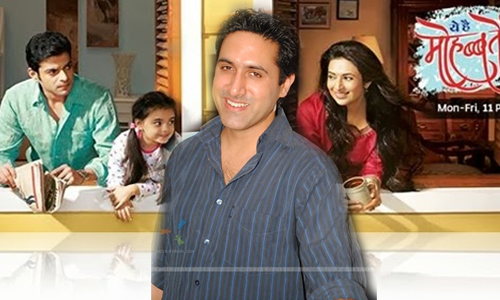 Popular actor Sumeet Sachdev who rose to fame with Balaji Telefilms' most popular Saas bahu show Kyunki Saas Bhi Kabhi Bahu Thi on Star Plus as Gomzi (Gautam) is returning to small screen after a sabbatical. Yes, the actor who has been associated with the production house from quite some time now is all set for a cameo in Ye Hai Mohabbatein.

As the show is already grabbing many eyeballs of the viewers and riding high with its popularity thus to maintain their attention, the makers are trying hard to bring in new twist and turns in the show.

TellyBuzz wishes Sumeet Sachdev all the best for the show!

6 years ago Im loving him. I like the chemistry between ManIsh and how Ravan Kumar gets jealous.
Pammi aunty is damn right about him being hotness ki dukaan.

6 years ago It is so good to have you back. You look better than ever. In love with you. Welcome to YHM.

6 years ago HURRAY! I think they couldn't have picked a better actor than Sumeet. I loved him as Gomzy and I think I'm gonna like this new character Abhimanyu ( esp since it seems like he's a positive character).

And omg. he looks so much better. He's lost weight and looking like he's in his 20s again. :)

Welcome back Sumeet. We missed you.

+ 2
6 years ago college would have been 10 years ago so Sumeet is perfect to play a college friend... so
Ishita must in her late 20's so i dont see a problem

+ 6
6 years ago Welcome back Sumeet. Interesting track ahead... Love IshRa.. Karan Patel and Divyanka Tripathi are doing a fab job..

6 years ago wil b a lovly track btwn ishita n raman..he must b jealos of sumit and wil realize his lov for ishi :) sumit is a grt actor, lovd him as a gomzy