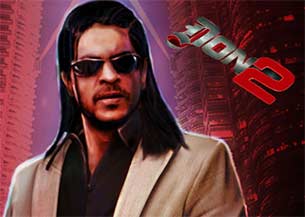 It's been two years since superstar Shah Rukh Khan's "Don 2" released. He says he would love to have another "10 sequels" to the film.

Shah Rukh took to Twitter to thank the makers and share the fun he had while shooting the film.

"Thanks Farhan Akhtar, Ritesh Sidhwani, Lara Dutta and my man Boman (Irani)...one of the finest film making fun I ever had. Hope we all make 10 sequels to 'Don'," Shah Rukh posted on the microblogging site Tuesday.

"Don 2" was a sequel to the 2006 film "Don", which was a remake of the 1978 film of the same name. The original starred Amitabh Bachchan in the lead role.