New Delhi, Aug 30 (IANS) Lady Gaga's reinventive ways may be weird for some, but Bollywood superstar Shah Rukh Khan finds her extremely inspiring. The actor, who has been working towards convincing the international pop star to do a song for his mega budget project 'Ra.One' says she knows her business well. 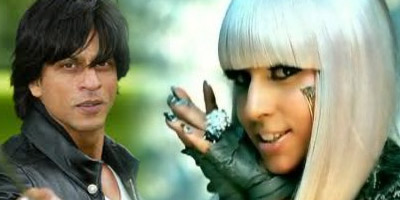 'I have been chatting up with her (Lady Gaga) over a song that I want to do with her and once her manager had said 'Lady Gaga wants to introduce her audience to you and she wants to be introduced to your audience'. So one understands she believes in pure, simple wonderful business,' Shah Rukh said here Tuesday night.

The 45-year-old actor-producer was speaking at the launch of management guru and movie producer Arindam Chaudhuri and his wife Rajita's new marketing book 'Thorns to Competition'.

He mentioned Gaga at the thought of reinvention, which is an important tool of marketing, according to the book.

'I have learnt re-inventing ...So I don't listen to raag Bhairavi any more... I listen to Lady Gaga. My son and daughter have converted me from 'Saturday Night Fever' to Justin Bieber...,' he added.

King Khan looked dapper in a black suit and his hair tied in a little and was at his humorous best.

International pop singer Akon has already recorded a song 'Chammak Challo' , which is already a rage ever since it was leaked online. So whether Lady Gaga is recording a song for this film remains a mystery.