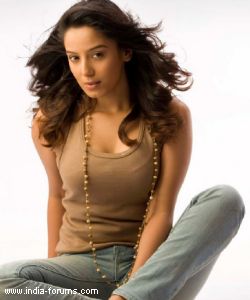 After playing the bubbly and chirpy Manjari in Star One's Yeh Ishq Haaye, Srishty Rode is all set to don a character diametrically opposite to her previous one. Srishty Rode has been finalized to play Shobha in Zee TV's historic show Shobha Somnath Ki produced by Swastik Pictures.

TellyBuzz had already reported about the leap of the show because of which Amrita Raichand and Yash Tonk decided to quit the show. After the leap several new faces will be seen in the show for which the casting is on.

Tellybuzz tried to contact Srishty, but she was unavailable for comments.

Seems like Srishty is one of the few lucky girls who is playing the lead for the second time as soon as her previous show went off air.

We wish her good luck!

9 years ago yup she's gud but she's not like shobha , she dnt resemble the younger shobha

+ 5
9 years ago @aru
agree with u she's gud but she's not like shobha , she dnt resemble the younger shobha

zzuubbeenn 9 years ago Srishty ur tooo good n there is no doubt abt it!!!...ur vry pretty with a beautiful smile n yes with a spark in ur eyes!!..I Donno if ppl
dnt like u yr they even commenting on this article.. I think they hav no other work!!!..Bt it shldnt bother u coz ur stepping ahead in ur work n thtz really good!!!..I think. Yih dint work bcoz of plenty of other reasons Bt I n ur other fans don't blame u at all!!..intact I feel it streached out so much bcoz of ur input in it!!!..don't b disheartened by all these bad comments...v love u n always will... All d best for ssk

+ 7
9 years ago Some people really need to grow up.. The makers of the show have taken her and if they have, they definitely know their work.. Why blame her?? I have seen so worse actors who dont even know the "A" of acting and still they are praised for their expressions and acting...

Atleast Srishty is not like them.. She played a character that required her to be the way she is.. Stop bashing her and YIH for DMG's closure.. DMG turned pathetic towards the end with the extra Marital affair... Thank God it was put off air, it spared us the horrors...

9 years ago I agree with Budtameez, my family, friends and I have had discussions as to who would be best suited to essay the role of warrior princess Shobha and everyone said that Mugdha Chaphekar [of Prithviraj Chauhan fame] would be best suited for this role!
YOUNG SHOBHNA DOES NOT HAVE A CROOKED SMILE..is very funny..lol

+ 5
9 years ago im plain skeptical about the show..
reagrding shristy..there are WORSE actors than her who have managed to make it in TV..trust me...YIH didnt work cos it was made a mess with regards to story..not to forget that SO was just waiting to pull it off air!she tried hard but wasnt directed well enough!...Manjiri was OTT but thats how she was supposed to be!
shobha somnath ki is sinking ship...i can see it shutting down in months...i wonder why shes stepping in it!
all the best sristy!

harikajaanu 9 years ago i actually got attracted to the title YEH ISHQ HAYEE!!! sounds so good and i thought it wud become a g8 show like mjht bt to mah surprise it was a pathetic show i tried to watch it bt its bcoz of Srishty i cudnt make up with the show plz understand the fact therez no point of watching her ruin such a g8 epic no more torture plzz she gives a million dollar smile as if shez posing for a tooth paste ad oh god plz spare us plzzz

raireena85 9 years ago srishty plz dont b demotivated by these comments!!..al ur fans know tht wht a talented actor ur!!!...n yes u got ur second show as a lead tht proves it all!!!!...u r the best keep rocking as alwayz...love u vry much n all the best!!! :)