Sreesanth will play the role of a cricketer and Mammootty plays a police officer whose son is cricket crazy.

'I play the role of a lazy police officer and my seven-year-old son is a cricket fanatic. Betting in cricket is also involved,' said the superstar over phone from Chennai.

'See, this is going to be a film that will happen sometime in the second half of next year. One of the films I am doing now is Renji Panicker's film where I play the role of a police officer for the 25th time in my career. Another film in uniform for me could wait,' said Mammootty.

The proposed film will be produced by Alvin Antony and Khader Mayyazhi and directed by Aashiq Abu, who worked as an assistant to veteran director Kamal. 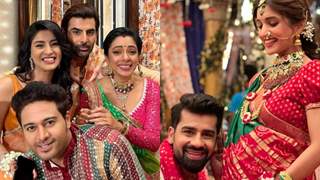 Anu and Anuj act as Vanraj and Kavya; Anupamaa reveals that she wants ...