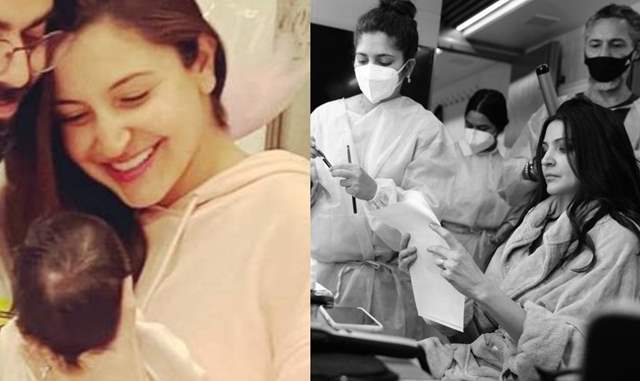 As reported earlier, Anushka Sharma who recently welcomed her first child with husband Virat Kohli is back to work. On January 11, 2021, the actress along and her cricketer husband were blessed with a baby girl. The celebrity couple has named their princess Vamika and unlike other star couples, they have decided to keep her away from lime-light.

Earlier, it was also reported that Anushka will be dedicating all her time to her little one and hence had taken a long maternity break from work and before her delivery she had winded up all her work commitments.

A source close to the actress even revealed to us that she has resumed shooting two months before she was expected to face the arclights!

According to the source, Anushka, who recently became a mother in January this year, was slated to return to work in May but she decided to bounce back before her scheduled return.

Yesterday morning she was spotted shooting for an endorsement looking supremely fit and drop-dead gorgeous!

Now, Anushka has given a sneek-peak of the behind-the-scenes of her shooting and when we contacted our source close to the actress we got to know that she and the team are taking utmost care and following all the precautionary COVID- 19 measures.

Like a doting mother, Anushka is making sure to keep herself safe at all times during the shoot to not take any virus back at home to her newborn and even her team is taking care to wear PPE kits, maintain distance and keep themselves and the equipments sanitized around the actress keeping in mind that she is a new mother and has a newborn to go to.

The source also confirmed that Anushka is loving the shooting process after giving birth to her baby girl Vamika.

+ 5
5 months ago khudh ka baby hai na ... why is it a news as if she is being a doting mother to someone else's baby