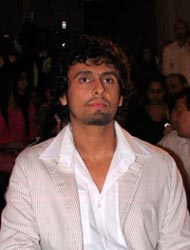 We are not talking about Sonu Nigam taking the judges seat, but he will be seen as a mentor on Indian Idol 4. The singer had been part of the show earlier and was seen judging the first two seasons.

“Sonu is coming in as mentor in the show. He is not permanent and will be seen on and off,” says our khabroo.

When asked about his re-entry in show the source adds that, “As he has been always felt close to the show, he thought of helping these aspiring singers. He will give some tips to the participants on singing notes.”

“This is the first time that Sonu will be seen as mentor. Though he has bid adieu to television as host and judge, in the next episode you can see your favorite singer in a new avatar,” concludes the source.

So viewers get ready for some dhamaal with Sonu on Indian Idol 4.

13 years ago That''s good! At least Sonu will be more of a good and correct judge unlike the current ones! :S

13 years ago thts gd hes cming bk! i thnk he wl b a grt hlp to the contestants! as he is a fantastic singer himslf! gd lck!

+ 5
13 years ago oh yaas gnna watch it 4 him now
he rocks
well a want rajdeep to win atleast he will have sum gud new tips 4 singin :L

+ 2
13 years ago haila Sonu and Hussain in one show..omg both r my fav...uff can´t wait to see him there

13 years ago omg i am soooo happy, can''t wait to have sonu back,
love sonu he is the best

+ 2
13 years ago Thank gos he is back.. this years indian idol is very dull.. no good singers.. they do need his advice..