Hey enough of Sonam in girl next door roles but next she will be seen in a very glamorous avatar. 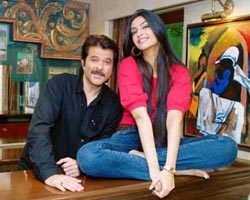 Featured Video
We have seen her going glamorous for Verve cover page but now in films too.


Sonams next film is Aayesha, where she plays a girl from rich family background. The film will also star Abhay Deol as a lead actor. Even Anil Kapoor is a part of the film. This for the first time that father and daughter are coming together in a film and surprisingly Anil Kapoor will be playing Sonams father in the film.


Aayesha will be produced by Anil Kapoor and its shooting is scheduled to start from April.


From Sakina to Bittu and finally Aayesha. So, even Sonam going the glamorous way.