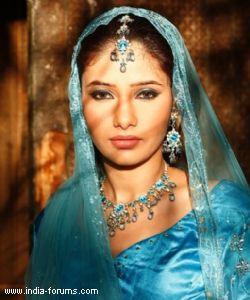 Telly Buzz earlier broke the news about the Production House of Ganga Kii Dheej On Sahara One planning to come up with the comeback track of Sharmi (Sonam Mann). And the latest we hear is that the track is decided and she will enter the show soon.

A source states, "Sharmi who had failed the earlier was sent to Narag Ke Dwaar.  But in the coming episodes, she will return to the village knowing all the secrets of Mahamai (Partima Kannan) and Dadabhai (Kabir Bedi). She will disguise herself as a different person so that she can reach out to Pakhi (Leena jumani) and tell her the truth."

We contacted Sonam Mann and she confirmed saying, "Yes, I am returning in the show disguising as someone else. I was earlier sent to Narag ke Dwaar from where I have returned today with the truth. Sharmi will try her best to reach Pakhi and it will be a hit and miss track shown between Sharmi and Pakhi."

Sonam's entry will be on air on 19th May.

champagne5 9 years ago Good acting -grt casting- engrossing script - actually getting butterflies in the stomach abt the suspense of Ganga/Sharmi -secrets to be revealed n maybe another lovestory in the offing - Ganga n Shivom? grt chemistry between Agankhi - but wht when dadbhai s truth is exposed -N with all this grt scenes yet to be telecast -DISASTER ! GKD to go off air ! MADNESS ! CRAZY ! PATHETIC ! IDIOTIC !

Amy07 9 years ago i really like this show...kmh 1 director made it n surely its awsome...

iheart009 9 years ago its a good news.i like her n acting also.she is soo PRETTY

melliflous 9 years ago wow...sharmi is back!!! :)...thanks IF for all the updates abt Ganga Ki Dheej...It's a show par excellence...the viewers who watch it know what i mean! Can we please have interview Mohit Raina and Leena Jumani in wassup!