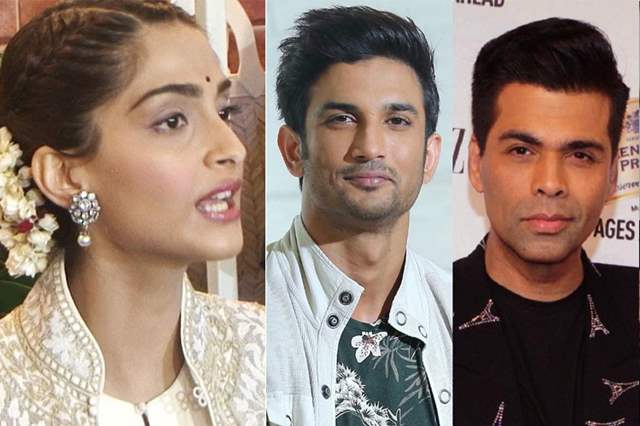 The saga surrounding the nepotism debate and apparent 'gang' mentality in Bollywood has been discussed by one and all lately, and a lot of that has begun owing to the sad demise of Sushant Singh Rajput.

Amidst all this, if there is one thing that has been more prevalent than everything else then that it people on social media digging up old posts and videos of 'starkids' giving their comments about Rajput.

One of them had actor Sonam Kapoor's statement on her appearance on Koffee With Karan. The segment shows how Kapoor mentions that she hasn't seen any film of Sushant's and this statement, according to Kapoor has been entirely misunderstood. In her posts, she shared a streak of filthy messages that she and her family members are flooded with post the KWK video going viral on social media. She later mentioned that she turned off her and her parents' comments section because they were receiving immense hatred. First talking about the video, she said,  "By the way that episode that's been edited isn't all that I said. But people want to believe what they want to believe. It has been edited please do me a favor and watch the whole thing." Sonam shared a couple of screenshots of haters wishing death on her future children and abusing her aged parents.

She added, "Also people wishing death on my future children and on my family, that video you've been spouting was seven years old. When he (Sushant Singh Rajput) had done one film out I didn't know him, like he didn't know me and didn't say anything about me till now. Also please go and watch the episodes where my fellow actors have maybe said much worse about me, but I have taken it in the spirit the show was meant to be, in jest."

Sonam captioned her post saying, "This is some of the comments coming my way. All the media and all the people who’ve encouraged this sort of behavior and instigated it. This is on you. People talking about how one should have been kind to someone are doing worse to others. I encourage you guys to see my comment section. And I’m sure you don’t hope that the same comes your way. I hope your parents don’t have to see this sort of this stuff."

It wouldn't be unfair to say that some things are indeed blown out of proportion.

KgirlLuvsD3 1 months ago Brilliant, so because popular theory is that SSR became depressed because of blinds and rumors, etc. put out in support of star kids so after he dies people are following the rumors spread by Kangana and bashing Sonam? Y’all are literally sheep... just following the herd. At least think first, what relationship did Kangana have to Sushant that she would know what he went through? And this Shekar Kapur, bringing up his passion project Paani,that was shelved 5 years ago under the guise of caring about Sushant.

msin 1 months ago Stop giving platform to nepo kids .. enough is enough .. these locusts will eat away the

Nature-Happiness 1 months ago It was indeed blown out of proportion. But, what your gang said, was not less... Given a chance, they would have already killed him. At least, you said you didn't know him, but the father of all annoying newbies in bolly, always discriminated! Do you have anything to say about him? Also, even if you don't know an actor, you would say positive stuff about him, so that he does better! Instead, Sushant, Who? Sorry, but Bollywood is horrible!!

Tippy-top 1 months ago Sonam Kapoor this time you are chased by general public, not trolls. Please understand.

ishan2003 1 months ago I agree she is not a good actor, but no one has the right to abuse anyone like what they have been facing.

luvumjht 1 months ago Playing sympathy card. Wonder what kjo has to say now, coz he had issues when kangana did it. You may have not killed him but the entitlement of nepo kids gang has broken many dreams and aspirations. So just be quite and reflect upon the the chances you took away from deserving people despite of your pathetic acting skills (if you had any). Ps : I am not a bot, don’t have followers or profile pic, because my father cannot buy me a PR machinery.

Tippy-top 1 months ago Sonam please be quiet. Don't try to give silly justifications.

Eisha Singh expresses gratitude to her mother for prepping ...
49 minutes ago