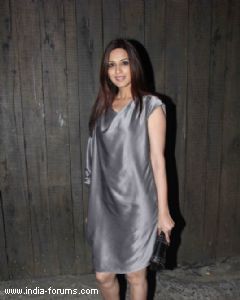 Sonali Bendre will be seen as the narrator in the new reality show Mission Sapne and the actress says that she loved the concept.

"It's a small and simple show. The theory is simple - one man helps another man. A lot of celebrities will live the life of common man. It was a beautiful concept and whatever I and the whole team could do, we did towards this good cause," the 39-year-old said here at the Zee Cine awards.

Mission Sapne will go on air on Colors TV around in March or April.

7 years ago i m very excited for this show.
specially for ram appearance.

7 years ago don't know about others ,i just waiting for my angel DRASHTI DHAMI.why they not tag her name?

+ 2
7 years ago Its a really good show with good concept.. It will be interesting to see.how the celebraties cope up wid comman man Life..

7 years ago Excited for this show to see Ram..

7 years ago super excited 4 this show only 4 ram