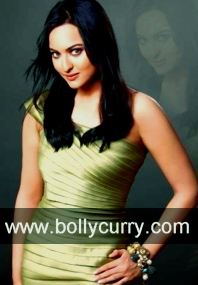 Last Tuesday afternoon, Salman Khan, Sonu Sood and Sonakshi Sinha were mobbed by crazed fans in Hyderabad and as many as 30 of Salman's personal bouncers couldn't handle the hysteria of the situation.

Salman, consequently, is heard to have been so incensed that he stormed out of the place with all his colleagues and canceled plans for another event that was to happen in the city that same evening.

Salman had promised Sonakshi's father to take care of her but due to the incident in Hyderabad, Salman felt that he had fallen short of his word and that did not go down well with B-town's Macho Man.

The trio returned to Mumbai with bruised arms and legs and a deeply affected and quite shocked Sonakshi.
Well, well Miss Debutante! Welcome aboard to progressive stardom, and its many pretty sights (not)!