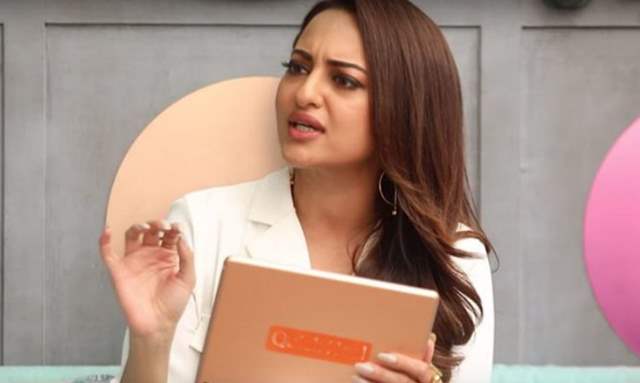 A costume designer turned actress, Sonakshi Sinha, had to fight against all odds to make her name shine in the industry. She might be a star kid but had to face a number of stumbling blocks in the way of her filmy career. From not being the ‘perfect size’ required for films to being called out for nepotism, the actress had to face it all.

It is a very common notion that only outsiders in the film industry have to face struggle to make their mark while the star kids or the people related to the film fraternity have it all easy. But, that is not completely true as Sonakshi’s journey from being a 95 kilos kid to today being a successful actress was no cakewalk.

In a recent video posted by the actress, Sonakshi has a perfect reply to all the trolls who have body-shamed her and said mean things about her shape and size. She shared the video with the caption, “Let’s talk about the elephant in the room! For years I’ve been trolled because of my weight. I’ve never felt the need to react because I always believed i was #BiggerThanThem... pun intended.”

First, she reads out the mean comments she has been receiving on social media and then goes on to call out the trolls for their merciless remarks. “Trolls. That’s what they call themselves. Those people who just wanna kill your vibe? The people who have all the time to judge others and no work to do! So they say anything. Sometimes we feel angry, hurt or numb but now we just laugh it off because that’s what these people are, a joke,” says Sonakshi in the video.

Further, she goes on to add how even after losing 30 kgs the comments didn’t stop and that’s when she decided to not care about them anymore. “But then I thought that even after shedding 30 kgs, they are still at it? That’s when I said, to hell with them. Because Sonakshi Sinha is here for a reason. I made it as I was and I have nothing to hide! Not my curves, not my weight, not my image. I am not a number on the scale and that’s what makes me bigger than them...pun intended.”

On the work front, she will be seen as Rajjo yet again alongside Salman Khan in Dabangg 3, which is slated to release on 20 December 2019.