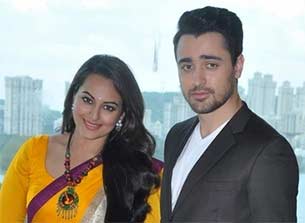 Bollywood actors Sonakshi Sinha and Imran Khan have lent their voices for the dubbed Hindi version of "Rio 2", the sequel to 2011's hit animation flick "Rio".

Sonakshi and Imran will feature as macaws Jewel and Blu. The characters in the English version were voiced by Anne Hathaway and Jesse Eisenberg.

"I love watching animation films, so when they approached me to lend my voice to the sequel of one of the most loved animations - 'Rio', I didn't have to think twice. It's a completely new experience for me and I'm very excited. It's a treat not only for the kids, but families as well," Sonakshi said in a statement.

The movie is an adventure comedy set in the Brazilian city of Rio De Janeiro. The movie will feature the return of Blu, Jewel and their three kids who leave their domesticated life for a journey to Amazon rainforest.

"Rio 2" in 3D releases in India April 11 in English, Hindi, Tamil and Telegu.

Urmila Matondkar Does Not Regret, But Ready to Apologise for ...
11 minutes ago

Shabana Azmi speaks about recovering from her Devastating ...
34 minutes ago

Who is AK in Sushant's Unseen Video that has Surfaced? Watch ...
38 minutes ago