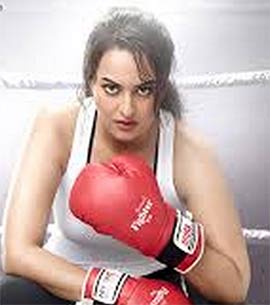 Actress Sonakshi Sinha who garnered positive reviews for her performance in "Lootera" and is now gearing up for the release of "Holiday - A Soldier Is Never Off Duty", says she has recently signed a new project, which is women-oriented.

"I have now signed a new film which has a women-oriented subject. I am quite excited about that project, but I'm not allowed to talk about it till the producers make an official announcement," Sonakshi told IANS.

Asked if the movie is a remake of a southern film, she said: "Wait till the announcement."

The actress says she received varied offers after her strong performance in "Lootera".

"I was approached for many films post 'Lootera', but I didn't feel strongly about them. 'Lootera' was written for me, but the other offers that I got post 'Lootera' were not convincing," she said.

Her new movie "Holiday - A Soldier Is Never Off Duty", directed by A.R. Murugadoss, features Akshay Kumar as the male lead.