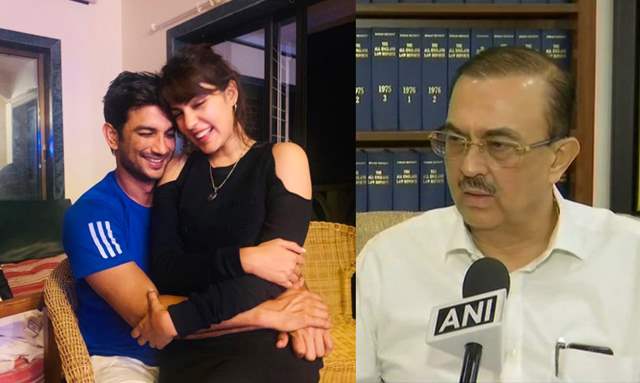 Sushant Sigh Rajput’s untimely death was a shock to the entire nation and his family is still mourning his loss. The actor passed away on June 14 at his Bandra residence. While some consider his death to be mysterious, Mumbai police were ready to rule out the possibility of foul play in his death.

However, in a recent turn of events, Sushant’s rumored girlfriend Rhea Chakraborty has turned out to be a prime suspect in connection to the case and a team of Mumbai Police and Bihar Police are probing into the case.

Sushant’s death investigation saw shocking developments after the late actor’s father lodged a five-page FIR against Rhea in Patna, alleging abetment of suicide among other things.

Now, Senior advocate Vikas Singh, who is the family lawyer of actor Sushant Singh Rajput on Wednesday stated that Rhea Chakraborty’s plea in the Supreme Court seeking transfer of an FIR from Patna indicates that “somebody in Mumbai police was helping her.”

Singh said Rhea, who was seeking transfer of Sushant’s case to CBI until now, has now chosen to move top court seeking a stay on the investigation.

A recent PTI report quoted Singh saying, “If she (Rhea) has moved the apex court, she should have filed a petition seeking CBI investigation.”

“FIR is registered in Patna, now she (Rhea) has filed a petition in Supreme Court seeking stay and transfer of investigation to Mumbai. Isse jyada kya proof chahiye ki (what more proof is needed that) somebody in Mumbai Police is helping her,” added Vikas Singh.

After the FIR was filed by Sushant’s father in Patna, Rhea approached the Supreme Court seeking transfer of an FIR from Patna to Mumbai and the stay on the investigation by the Bihar police on the allegations.

Meanwhile, Hindustan Times report stated that the move of Rhea to rush to the top court assumes significance in view of the fact that a four-member probe team of Bihar police is already in Mumbai and may seek to interrogate the actress as the FIR lodged at Patna by Rajput’s father, K K Singh, contained allegations of severe criminal offences such as abetment of suicide and criminal breach of trust under the IPC.

Rhea’s advocate Satish Maneshinde said that he has filed a petition in the apex court seeking transfer of the case from Patna to Mumbai where the probe in the death case of actor Sushant Singh Rajput is going on.

The report further mentioned that In her plea, Rhea Chakraborty has also sought a stay on the probe by Bihar Police on the FIR lodged by Rajput’s father till disposal of her plea in the top court, Maneshinde said.