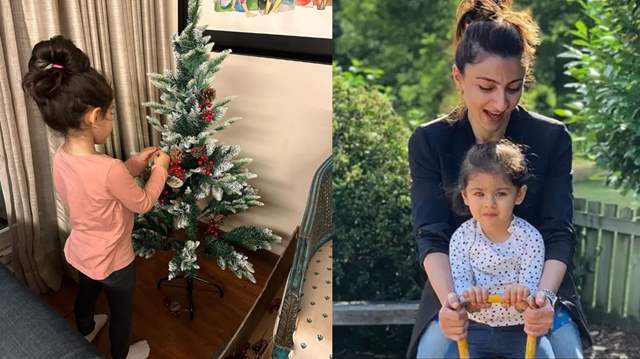 Soha Ali Khan's little munchkin Inaaya is a sweetheart and we have witnessed her  social media presence. She has a sizable fan base and netizens love to see her pics and videos. Well, Christmas is still a month away, but it appears that Inaaya has already compiled a list of her favourite items.

Today, Soha took to her social media handle and posted a picture of a sweet letter that Inaaya sent to Santa. The actress also posted a photo of the star kid getting ready for Christmas, as she was seen standing near a christmas tree and trying to decorate it.

She was seen decked in a salmon pink tee with black pants. In the next picture we can see the lovely handwitten letter with a finger puppet lying over it. The letter read, “Dear Santa, I hope too are happy. This is mi list of presents: 1. Dress calr bloo, 2. For mama (sketch of a dress), A Book (sketch of a book), 3. For Papa's shoes (drawing of boots) kalr red. Lav Inaaya.”

Sharing the pictures on Instagram, Soha wrote, “Only a month to go so we thought we should get into the spirit of things... starting with our letter to Santa. As she shared the post, Lara Dutta commented, "hope Santas paying attention !! 😉😉. Colours are quite specific!".

For the unversed, Soha Ali Khan and Kunal Kemmu tied the knot in 2015. They became parents to Inaaya in the year 2017. She most recently appeared in the web series Hush Hush, which also starred Shahana Goswami, Ayesha Jhulka, Juhi Chawla, Karishma Tanna, and Kritika Kamra.