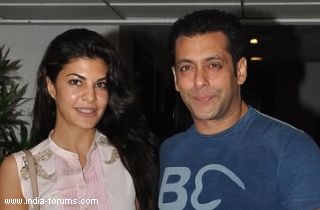 Actress Jacqueline Fernandes finds "nothing to worry about" in the fact that Salman Khan has "overpowering" presence in their forthcoming Bollywood film "Kick".

"The movie is on Salman's shoulders. He is the main lead of this film, people come to see Salman Khan at the end of the day, and for me to be part of it, is a very big deal," Jacqueline said here.

"Even if Salman is overpowering you (an artist), it's fine. He is a superstar, he is a very strong person. That's nothing to worry about. For any actor, it only does good," she said.

Directed by Sajid Nadiadwala, "Kick" has a screenplay by Chetan Bhagat.

Jacqueline, who hails from Sri Lanka, says her Bollywood journey, which started with the 2009 film "Aladin", has been "amazing".

"I couldn't have asked for anything more. I came here not knowing anybody. I am happy...when I look back at my career, I have worked with amazing people. I feel I have been blessed. Doing a movie like 'Kick'...I think my hard work has paid off," she added.

Jacqueline, a Salman Khan fan herself, says she loved him in "Hum Dil De Chuke Sanam".