It is very easy to make fun at others, but how does it feel when one mocks at himself? Well, this is what the 'Queen of Soaps', Ekta Kapoor has managed to do in her next film. 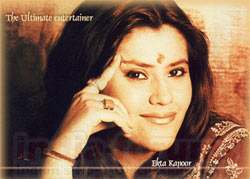 While there are many loyalists in the Ekta camp, there is an equally good enemy list growing too, which includes names like Anuj Saxena, Rajeev Khandelwal, Aamna Sharif as well as Pulkit Samrat. Now, wonder what Ekta meant to convey by pulling her own legs in the film? Is it to give a 'Warning Signal' to her enemies?

Well, if that is the case, it's better that her enemies keep a close watch on her!!!