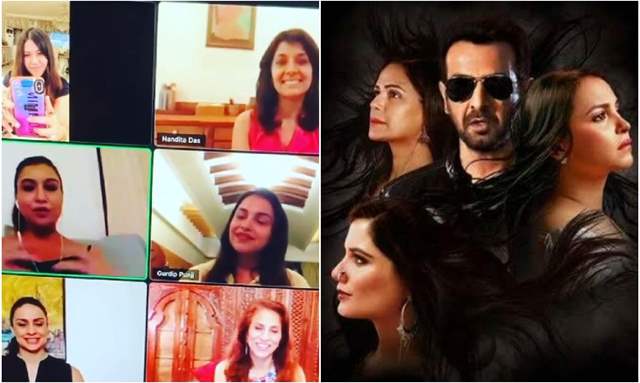 ALTBalaji and ZEE5 have been known for their unique and unheard-of promotional strategies backing their superlative content. Considering the lockdown scenario, the makers are still leaving no stone unturned to keep the audiences fixated and entertained while trying various digital concepts to reach out to their fans and well-wishers. With humongous excitement ahead of their latest show, Kehne Ko Humsafar Hain season 3 on ALTBalaji and ZEE5, the two leading platforms decided to curate a big debate on relationships.

The highly engaging and interactive debate got off to an exciting start with the incredible Shobhaa De as the host. Touching several important questions related to marriage, love, infidelity, societal pressures, the big debate certainly proved to be big and spectacular and raised many eyebrows with startling revelations and unabashed reverts by the esteemed panellists.

Speaking about the concept of her show, Kehne Ko Humsafar Hain that deals with love, marriage, infidelity, divorce, second marriage, Ekta Kapoor said, “It all started with a very interesting moment when I was watching an old film of my father called Apnapan. In that particular film, Reena Roy was the vamp because she left her family over her career and didn’t want to have children. I told my father that I am that character! The life I have led, the content I have made, the choices I have made and the shows that I have made are all different boxes. I am the last person to have a judgement on anyone. I try to bring every character, not with sympathy but empathy. I don’t think I am the person made for marriage. I like things very clear in my life. So, when I was working on Kehne Ko Humsafar Hain, I got the chance to speak about characters when I don’t want them to be black and white and just the greys.“

Talking about women who have challenged the norms of marriage in our society, Nandita Das said, “There is no level of patriarchy that we have in our society as the rest of the world. Marriage is a social and legal construct which we have brought in the sense of commitment from two people for life and saat pheres, etc. in which we commit to each other. When we talk about marriage, we need to ask ourselves of two people coming together or two families coming together. Often in a patriarchal society, it becomes various other things and not just between two individuals.”

Talking about relationships during lockdown and understanding it’s dynamics, Gul Panag added, “An unprecedented situation like a lockdown has forced people to be together 24X7 for 70 odd days, you see sides of each other which perhaps you would have never seen in 20 years. That could be a trigger for women who probably grudged along in an unhappy marriage but some of them might feel that they really cannot handle it anymore.“

exclusive
Exclusive Mohit Malhotra talks about reuniting with Hina Khan, if ...
21 minutes ago