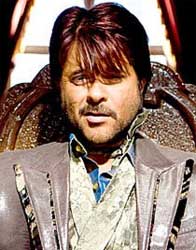 Featured Video
The intended Hindi title 'Slumdog Millionaire: Kaun Banega Crorepati' was shortened, thanks to copyright issues by the producers of the international game show 'Who Wants To Be A Millionaire'.

'It was a decision taken by the producers Fox Searchlight and we had nothing to do with the title of the Hindi version being altered. There was a problem with the branding,' Loveleen Tandon, film's casting director, told IANS.

Otherwise everything connected with the international game show 'Who Wants To Be A Millionaire' including the sets and music were copyright-purchased for 'Slumdog Millionaire'.

'The first thing that Celadore Films, who produced 'Slumdog Millionaire', did was to acquire the rights for 'Who Wants To Be A Millionaire' since it's such an integral part of the film,' said Tandon.

Speaking on the dubbing, Tandon, who has supervised the Hindi version, said: 'All the actors from the original English including Anil Kapoor, Irrfan Khan and Ankur Vikal dubbed the film. We got a boy from Chembur Pradeep Motwani to dub for the male lead Dev Patel. I didn't want any exaggerated dubbing. I wanted a young unspoilt voice.'

Based on Vikas Sawrup's novel 'Q&A', the film is a heart-warming story of an 18 year-old slum boy who goes on to win a staggering 20 million rupees on India's 'Who Wants To Be A Millionaire?' game show.