View Profile
John Abraham may be described as the perfect man by many fans, but long time girlfriend Bipasha is truly exasperated by his sleeping habits...outside of the bedroom! 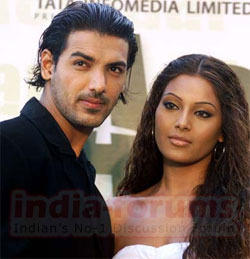 Featured Video
to his Bengali lady, she would love to have John watch her movies but he tends to fall asleep, much to her embarrassment.


When questioned about whether John would be at the premiere for her much awaited Bangla flick 'Sab Choritra Kalponik'; Bipasha replied, "He falls asleep in every film. That's why I don't take him for friends' premieres. It can get very embarrassing. How will he sit through my Bengali film for two hours when he can't follow a word of Bengali?"


The actress recently left John back in London as he completes his shooting for Abbas Tyrewala's film. "He was shooting at nights. In between, he went to the US for a film festival where 'Dostana' was screened. Then he returned again to shoot. All he does is shoot, gym and sleep," Bips said.


But this time John also has Bipasha's lengthy shopping list to deal with.


"The home-equipment stores in London are to die for. The only thing that I really did was shop, and it's really not over. I've given John a list of things to buy and bring back from London. They're precious knick-knacks."