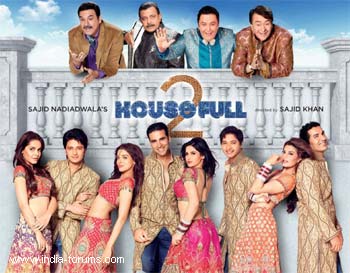 If the criteria for a film's popularity is the number of trailers of other films shown during release, then "Housefull 2" is the most popular film of all times. There are a record-breaking six trailers attached to it with chances of at least two more being finalised.

Sajid Nadiadwala, producer of the film, is at a loss as to how to stop the flow.

"Main kisko na bolun (Who could I say no to)? They're all friends asking to be a part of 'Housefull 2'. I'd love to have all the trailers. But if we allow them all, there will be more trailer-time than the feature film," said Nadiadwala.

The request for two of these trailers to be attached came from Nadiadwala's leading men.

And that isn't the end of the story. There are at least five more filmmakers insisting on letting their trailers be attached to "Housefull 2".

Nadiadwala will take a call on their fate in a day's time.

The problem is "Housefull 2" is already a lengthy two-hour-30-minute film. Six to eight trailers would bring the complete playing-time to nearly two hours 45 minutes.

"I've never felt more helpless. Evry producer who wants his trailer with 'Housefull 2' is a friend. It's truly a compliment to our film. Never before has any film been swamped with so many requests for trailers to be attached.