Singh Is Kinng is undoubtedly one of the most eagerly awaited releases of 2008 and as its release date (Aug 8th) is drawing closer, its director Anees Bazmee is understandably excited about his project. In a brief chat with him, he told us why his film promises to be something that Bollywood has never witnessed before.

Presently the most in demand director of Bollywood, Bazmee with two back to back super hits, No Entry and Welcome tells us, "SIK has all the right masala of a good commercial venture. It features terrific music, mind-blowing action sequences shot in virgin locales of Egypt, Punjab and Gold Coast in Australia apart from the uniqueness of most of the film's actors sporting a turban, which is a first for any Hindi film!" 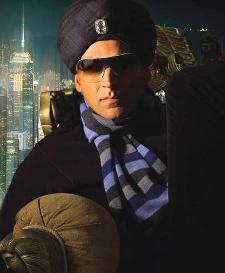 So was Akshay always his first choice for the title role? Or was he wanting to cash in on his Welcome hit jodi?  "Whenever I start writing any of my script, the first thing that I decide upon is the name of my hero's character. The character of Singh in SIK is that of a very happy go lucky guy who is a dare devil, knows no fear and is not a manipulative person at all. He just loves to eat, dance and live life King size but for that he believes in working very hard. That is when I decided to name him Happy Singh. Akshay I thought then was my perfect choice for the role."

How was the look of Akshay finalized? "After I decided to cast Akshay for the lead role, the very next day I spoke to Akshay's designer friend Shabina Khan for deciding upon Akshay's look. I was confident that Akshay would look great in a turban. That time rather than a complete Sardar with beard and turban, I told Shabina to design just a turban just to see how it looks on him. She came back with a turban and we tried it on Akshay and he looked amazing in it. I then took some pictures from my mobile just to get other's views too and everyone loved it. That's how we decided his look".

So has Akshay lived up to his expectations? "Yes of course! Akshay has done complete justice to the role and my confidence in him. He has many actions never attempted on Hindi screen before there is sky diving, jumping from one lift to another. He enjoys the thrill and he was very excited performing them because he was action after a real long time. Katrina also has improved as an actress and is very hard working. Every character in the film has a definite role no one has been wasted including Sonu Sood, Ranvir Shorey and Javed Jaffrey."

How does it feel to be the most sought after filmmaker whose movies spell huge box office returns? "See, I am not involved with the business aspect of the film. I want my films to do well and I am not doing films to promote myself. If I am not excited about my script I will just not do the film. I want my actors to do well as well. Ultimately, the audience should enjoy the film. I also don't believe in camps either. I only like to work with people whom I am comfortable with."